Over the years, a large number of studies have pointed at gender related problems in the news media, both in terms of representation and portrayal in content, as well as gender balance in staffing, management and ownership in the media sector itself.

Such problems are of course not unique for the media, but rather a reflection of norms and structures in societies. In more recent years, issues of gendered disinformation and hate speech targeting women, and specifically women journalists, in an increasingly digitalised media world, have also been observed.

Fojo Media Institute has conducted the study in collaboration with the Department of Journalism, Media and Communication, University of Gothenburg, mapping law and policy (regulation and self-regulation) and identifying measures to promote gender equality in the media and women’s freedom of expression. The study covers policy instruments adopted at international to media house levels in over 100 countries. Parallel to the global study, case studies have been developed in a sample of countries in which Fojo Media Institute is active: Armenia, Bangladesh, Rwanda, Somalia, Sweden and Zimbabwe.

On a supranational level, there is a long-standing agreement between United Nations (UN) members States to advance women’s rights and gender equality in and through the media, as part of the Beijing Declaration and Platform for Action for the Advancement of women (BPfA, 1995). For the 189 member states, the BPfA is a morally binding action plan.

All countries exist in unique cultural and historical settings, in which media have developed. Countries like Sweden, with a long tradition of women’s rights movement and extensive gender equality legislation, score high on measures of gender equality in the media.

They study shows that a preferred method to promote gender equality in media would be to establish proper and efficient self or co-regulatory mechanisms, which can be promoted through appropriate media policies and legislation. The study also gives general and detailed recommendations on how to achieve better gender equality and safety for journalists.

The study was initiated by Fojo Media Institute and conducted in collaboration with Department of Journalism, Media and Communication, University of Gothenburg. With International Media Support (IMS) as a contributing partner, as well as The International Training Programme 295: “Media Development in a Democratic Framework”. All parts of the project were funded by Sida/Sweden. 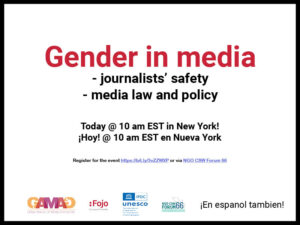 Presented during the Commission on the Status of Women parallel events

The study and findings were presented in a session titled ”Gender in mechanisms for journalists’ safety and in media regulation” in the context of the 2022 Commission on the Status of Women parallel events today, March 16th 2022. The seminar is arranged by Fojo Media Institute and the Global Alliance on Media and Gender – GAMAG with the United Nations Commission on the Status of Women, NGO Forum.