Veteran journalist Phyllis Mbanje does not remember her formative journalism with nostalgia but rather as a trying time in which she almost quit the profession. In her 18 years as a journalist, she has written several resignation letters and deleted them in equal measure, a sign of her perseverance in a profession that is male dominated and often viewed as female unfriendly.

Mbanje smiles before she sighs. ”My most trying moments were proving that I was just as capable as the boys and getting the editors to take notice. I almost quit countless times.  I would write my resignation and delete it before sending. Making a name for myself was harder because the beat I covered of health was often side-lined and stories relegated to pages we called ’Siberia’ because they never caught anyone’s attention.”

Last August the organisation Gender Media Connect (GMC) launched the Zimbabwe edition of The Global Media Monitoring Project (GMMP) 2020, the world’s longest-running and most extensive research on gender in the news media. The Zimbabwe chapter of the global report was supported by Fojo–IMS with funding from the Swedish Embassy in Zimbabwe.

The research was designed to capture a snapshot of gender on one “ordinary” news day in the world news media. An ordinary news day was defined as one in which the news agenda contains the run-of-the-mill mix of stories, everyday articles on politics, economy, social issues, crime and other issues. One of the key findings was that on the chosen day in Zimbabwe, media platforms did not carry stories that were written by females.

”Women journalists were overshadowed on most of the platforms save for the National Commercial Radio station, which had women anchors delivering the news”, read part of the GMMP.

Mbanje agrees with this finding. ”Most newsroom still have few female journalists and even fewer in positions of authority. Take Alpha Media Holdings (AMH) for an example, their editor Faith Zaba is the only female to ever lead the newspaper as an editor of a newspaper in that stable. According to the International Women Media Foundation Global report (2018), Zimbabwe men outnumber women in the journalism workforce by nearly 4:1—an overwhelming display of female marginalisation in the profession,” she says.

Mbanje has an explanation why. ”Female sources are very few largely because women are still afraid to be bold and make a statement even when they are correct. The patriarchal society can be very judgemental and potential women sources cower before this set up.”

Globally, for the past year, the majority of the global news coverage has been dominated by COVID-19, yet the data shows us that women’s voices have been yet again largely absent from the conversation. Women are on average 46 % of health specialists in reality but appeared as such in just 27 % of coronavirus stories. Positively worldwide, for the first time since 2010, there appears to be a slight upward movement in the proportion of women as sources and subjects in the news, notably in broadcast media.

Patience Zirima of Media Monitors Zimbabwe speaking at the launch in the capital Harare recommended media support organisations to ensure satire columnists are sensitised on how they can articulate issues without perpetuating stereotypes about women and youth.

She added: ”Media support groups need to focus their interventions on strengthening media houses’ policies on balance in news stories by stressing the importance of diversifying perspectives. But what does a male editor have to say about the finding in the GMMP report?” 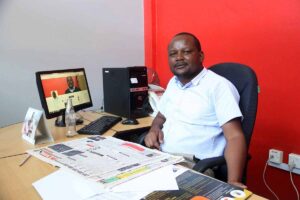 Kholwani Nyathi in his office.

Kholwani Nyathi, the editor of The Standard in Zimbabwe has his own take: “In the newsroom we always encourage journalists to ensure that their stories have female voices all the time, but most often we don’t meet those objectives because according to reporters, women in leadership positions, especially in politics, are reluctant to be quoted in sensitive stories.”

Nyathi said while there is a good number of women that train as journalists, few stay in the newsrooms long enough to rise to senior positions. ”In interactions with fellow female journalists, they cite among the reasons why women opt out of journalism for careers such as public relations, the prevalence of harassment both in the newsroom and by sources.”

There was consensus at the launch by government officials, CSOs and other stakeholders that there was need to strengthen media monitoring, revive advocacy campaigns and take stock post COVID19.

A recurring call was also that media houses needed to be supported not only in developing gender policies and gender action plans, but implementation of same.