When Miraj Ahmed Chowdhury attended a conference organised by the Global Investigative Journalism Network’s (GIJN) in Seoul in 2017, he had no idea that he was to become the editor of a GIJN Bangla website.

But a chance conversation with GIJN’s executive director, David Kaplan, set in motion a series of events resulting in the creation of a hugely popular site containing essential information for Bangladeshi journalists wanting to carry out thorough and robust investigative journalism.

Chowdhury, a journalist with 14 years experience, was attending the event as head of programmes and communications at the Management and Resources Development Initiative (MRDI) in Bangladesh.

For the past three and a half years he’s been organising and overseeing investigative journalism and other media training in Dhaka, delivered by international trainers brought in by the Fojo Media Institute.

Chowdhury’s experience, and Kaplan’s eagerness to see GIJN expand his organisation’s resources around the world, led to an agreement to create the 10th language site for the organisation – GIJN Bangla. 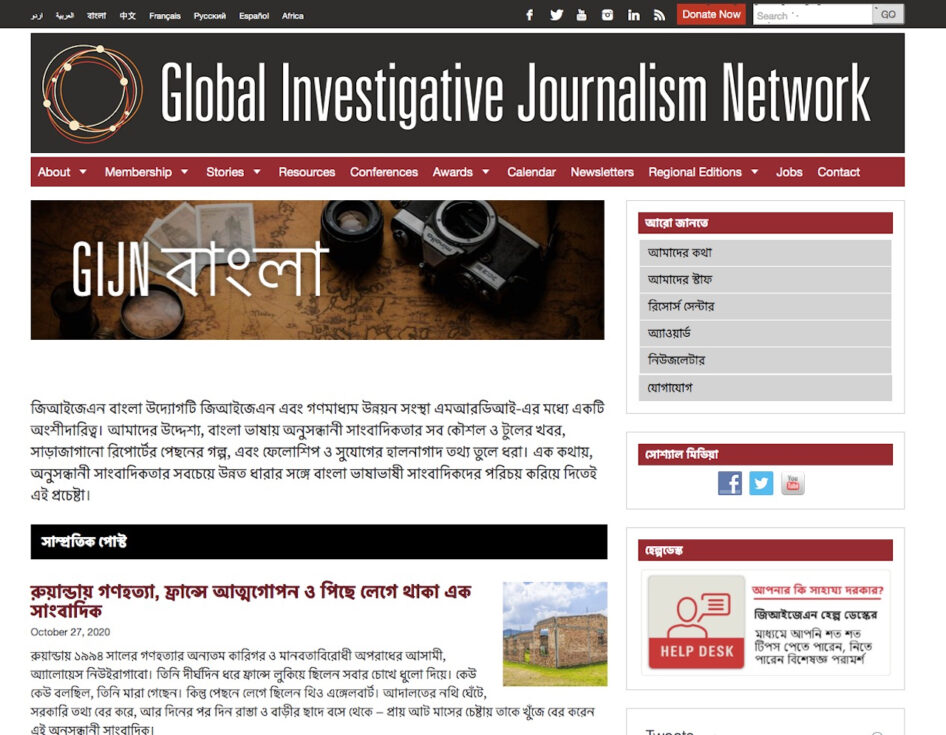 The aim of the site, launched in 2018, is, according to Chowdhury, to “enable Bangla-speaking journalists to benefit from international knowledge and resources, and to inform the rest of the world about the best of Bangladeshi investigative journalism”.

Two years on, Bangladesh now ranks 2nd in GIJN’s global reach of 130 countries with 43,000 unique visitors, that’s an 80% increase on the previous year.

Kaplan says the work of Fojo and MRDI in Bangladesh is “a case study in how to effectively develop the infrastructure to support investigative journalism at the national level”. He says their work, including support for GIJN Bangla, has “boosted journalism education and training, spread advanced tools and techniques, and strengthened watchdog reporting in the country”.

The GIJN link, he says, has “connected Bangla-speaking journalists to the global community of investigative reporters, through online networks, fellowships, webinars, and more”.

Qurratul-Ain-Tahmina, who is a ‘special news editor’ at Prothom Alo, says a few of her newspaper’s reporters use GIJN Bangla and she knows of reporters working with other news organisations who have contacted the GIJN helpdesk for support. She says the WhatsApp group run by the project is well-managed, communicative, and the content is specific, so “you get material that is carefully curated and shared by passionate investigative journalists, and it is in Bangla which matters a lot”.

Bangladeshi investigative journalist Syed Zain Al-Mahmood, who writes for a number of outlets including The Wall Street Journal and The Guardian, has visited GIJN Bangla several times. He says that for it to become influential it needs to have a lot more content contextualised for Bangladesh.

Chowdhury is aware that more needs to be done to increase the reach and influence of GIJN Bangla, which is why he and the team behind it are focussing heavily on social media.

The WhatsApp group has 217 members – which is the maximum allowed – and reached capacity after just five days. It is made up mostly of senior journalists. GIJN Bangla used to send daily updates but it’s now three or four times a week.

The GIJN Bangla Facebook page has more than 5,000 likes. Most followers are journalists, some are students studying journalism, and some are academics using GIJN Bangla content to teach students in Bangladeshi universities.

Chowdhury is particularly encouraged by the following of GIJN Bangla in India. He says visitors from Bangla-speaking states have grown exponentially. Google analytics show that between 2018 and 2019 traffic from Kolkata saw a five-fold increase with more visits from Assam ”than any other state considered as more educated and progressive”.

GIJN Bangla doesn’t investigate or produce stories apart from a series of reports Chowdhury published about covering Covid. He says the site is designed as “a knowledge platform based on cooperation and trust with investigative journalists learning from one another and benefitting from a repository of shared tools and techniques”.

And that shared knowledge and trust is important to journalists in Bangladesh who face a number of challenges. The country’s Digital Security Act (DSA) means that journalists have to be careful in order to stay within the law. Chowdhury says this can lead to self-censorship which can limit investigative journalism.

Data, compiled by Amnesty International from the Bangladeshi government’s Cyber Crime Tribunal, shows that almost 2,000 cases have been filed under the DSA since it came into force in October 2018 – around the time of the launch of GIJN Bangla.

Amnesty says this includes more than 800 cases filed in the first nine months of 2020 alone, with “many of the country’s most prominent editors and senior journalists being increasingly targeted”.

GIJN has a helpline called the hub where journalists can make contact if they need assistance. In the past 10 months around 60 calls came from Bangladesh. Chowdhury sees this as an indication that GIJN Bangla was launched at the right time, is meeting a need, and is serving the purpose of supporting investigative journalism in the region.

Lars Tallert, Head of policy and international development at Fojo Media Institute, says the GIJN Bangla initiative has inspired the organisation to replicate the model in Africa. “As a result of the success of GIJN Bangla, Fojo Media Institute has also decided to support GIJN East Africa, based in Uganda, and GIJN West Africa, based in Senegal, with our partner organisations there”, he said. Lars is hoping the east and west African initiatives will have the same impact as GIJN Bangla.

In May 2020, the west coast of Bangladesh was hit by Cyclone Amphan, at a time of lockdown due to coronavirus. There was no public transport and newsgathering was difficult. Award-winning Bangladeshi journalist Montu says that thanks to the Investigative Journalism Partnership, which covered the cost of an eight-day trip, he was able to compile enough information to file a series of five reports on the situation which led to the government taking action in the affected area.

Last year, Qadaruddin Shishir was a regular journalist at Jamuna Television in Dhaka. Today he is a fact-checkerand one of two co-founders of BD FactCheck.