Transparency – Invaluable Role of Media during the Global Pandemic

Hem/Nyheter/Transparency – Invaluable Role of Media during the Global Pandemic

Vietnam entered the pandemic under a cloud of rumors and fake news that threatened to spread nationwide if the country’s media had not stepped in to deal with it.

Rushing to uncover hoaxes
“There are six people dead in our parish already. Everyone is scared. The government is hiding it,” one of the first hoaxes surfaced when Covid-19 was still a novelty to most people in Vietnam. “My neighbor said that four people were put into a quarantine near her place already. They joined the Mass in the church this afternoon. Please confirm this information for me?” – some doubtful social media users threw out another piece of suspicious information.

The wildfire of rumors would not get better any soon. One woman who flew from Taiwan back home during the chaotic situation posted her selfie on her facebook, and said that she would do a livestream at night to share the experience of how to sneak out of the disease control.

Just some days after that, a famous online influencer who was well-known for her macrobiotic diet solutions claimed that you could treat Covid-19 by drinking your own urine every morning. Thousands of comments and shares praised these unconfirmable pieces of information and claims amid the early dark time of the pandemic.

Prominent newspaper rushed to grab several provocative stories on social media and tried to make sense of them. Several newspapers, such as Thanh Nien, Lao Dong, Phap Luat immediately contacted the woman who escaped the disease control and interviewed her and the local authorities. They gave the lady a chance to explained herself and pushed the local authority to act upon the critical situation.

News outlets knew that the Covid-19 was a rising trend. By using their wide and powerful network of information sources, they would be capable of generating updated and relevant information for the audience, especially when rumors seemed to triumph on social media. 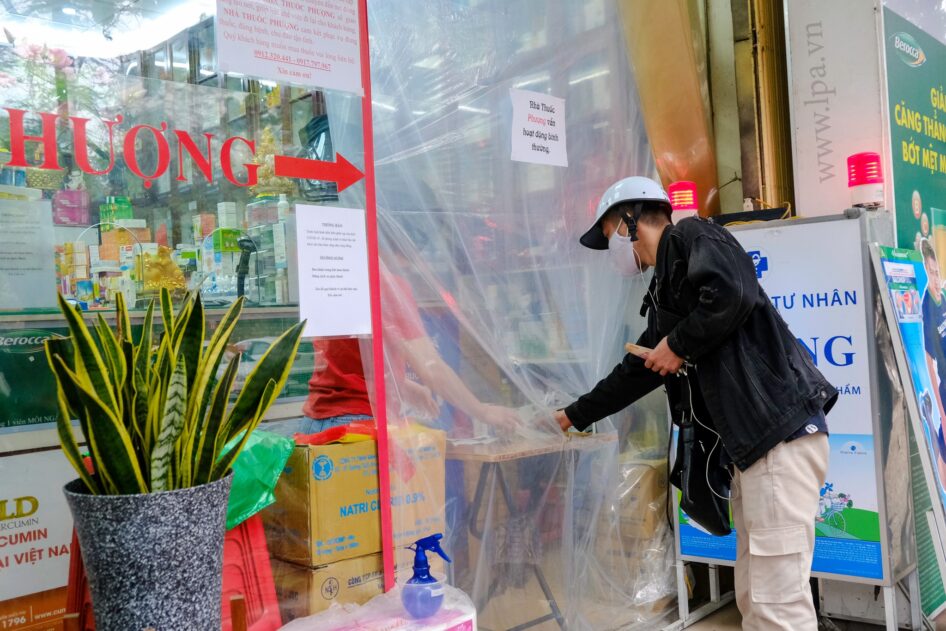 A man pays for medicine through a plastic curtain put up to at the front door of a pharmacy in Hanoi in April when the country went into a nation-wide lockdown. [Photo by Lekima Hung]

Transparency about the unknown
Orchestrating together with constant updates from mainstream newspapers, in the early days of the pandemic, the Ministry of Health quickly set up timeline updates on its website to disclose new cases and quarantine areas. Ministry of Health’s channels also provides journalists first-hand information on daily press conference held in the early morning, and at night, if urgent situations happened. Although the website was regularly updated after each press briefing, it failed to reach the majority of the public, who instead relied heavily on social media for the latest news.

To respond to this information gap, mobile networks Viettel, Vinaphone, and Mobiphone set up dedicated COVID-19 message platforms. Although initially, the messages sent out by the Ministry of Health were often met with ridicule and internet trolling, they bridged the information gap and showed the ministry was making a concerted effort to be transparent.

In March, the official facebook account of the Prime Minister’s Office started to deliver daily updates for the new Covid-19 cases along with localised situations. People were able to check quarantine areas, local regulations on social distancing, and help to trace close-contact cases with confirmed patients. These daily updates were more pro-active than most newspapers, and when the second wave hit in July, the Prime Minister’s Office started sending updates twice a day – faster than both Tuoi Tre and VnExpress, most circulated newspaper and most-read online newspaper respectively.

Using social media, national and local TV channels, and SMS platforms, the updates of COVID-19 have reached a broad range of demographics, from urban citizens to rural farmers, office workers to street vendors, and from factory workers to university students.

Buzz Metrics, a prominent social media metrics platform, revealed the COVID-19 Public Health Campaign run by the Ministry of Health topped the list of media campaigns launched in Vietnam in March and April 2020, surpassing major global brands on social media such as Standard Chartered Bank, Unilever’s Sunsilk and Shopee (1). The message the ministry delivered was straightforward and simple: “Stay at home.”

“When public health officials reveal what they know as well as what they don’t know, they build trust and credibility. This is essential for people to accept their advice. Openness promotes an understanding of what public health agencies do and a clearer picture of the real health risks people face,” the Association of Health Care Journalists in the US wrote in their guidance on the release of information concerning deaths, epidemics, and emerging diseases (3).

It seems the Vietnamese media took this advice seriously. In the early stages of the second outbreak in Danang, Professor Dang Duc Anh, President of the National Institute of Hygiene and Epidemiology (NIHE), spoke plainly to Thanh Nien Newspaper.

Although revealing the new strain was an unknown entity that could have caused public concern, it instead built trust and avoided potentially damaging hoax. Gaining public trust has been the major success of the state media in Vietnam during its coverage of the COVID-19 pandemic. 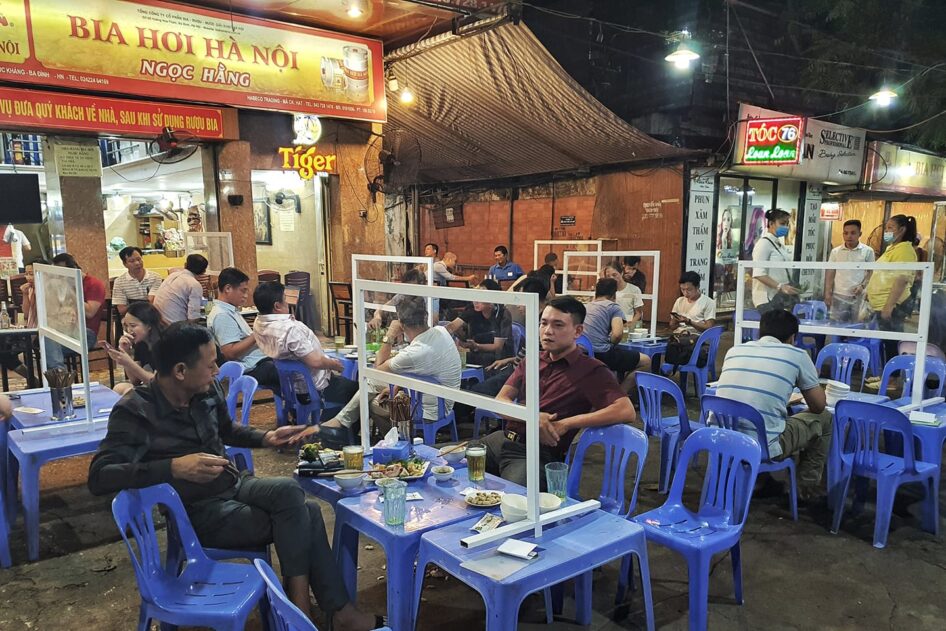 Men enjoy their bia hoi (local larger beer) through anti-drop screen in Hanoi. Under the requirement of the government, all restaurants, bars, cafes in the country came up with new ideas to adapt to the new normal after the country got the second hit that claimed 35 deaths and around 500 infected cases in the community. [Photo by Lekima Hung]

Timely response and strict fines
Notably, when the pandemic began in mid-January, most online platforms started circulating un-verified content about the situation in China. At that time, COVID-19 was new, and the concept of a pandemic was beyond comprehension. The nature of online news is simple: anything related to death, danger or conspiracies spreads like wildfire.

From Weibo to official online news in China, the Vietnamese audience began to taste the chaos, with drone videos from the non-stop smoke rising above a crematorium in Wuhan to the impacts of total lockdown chronic cancer patients who were unable to go to hospitals for their monthly treatment. Information was distributed based on narratives about an evil and miserable China. This kind of rhetoric may well have been harmless if the pandemic had stayed put, but within just 15 days, Vietnam, Singapore, Thailand, Taiwan, and Hong Kong had all reported cases.

Vietnam was quick to act in terms of medical response, but the media faced an uphill battle due to the barrage of fake news.

Rumors started to spread online. One man from Vinh City claimed the first death in the country had been covered up, while another girl posted that all markets would be closed and advised people to stock up on food. A self-proclaimed “doctor” offered treatment advice that involved antibiotics and warm water to cure the virus. All these posts were shared and re-posted thousands of times before law enforcement took them down.

Amidst this minefield of fake news, Vietnamese authorities took drastic action by arresting the people who created these hoaxes and handed down heavy fines. The food-hoarding girl was fined 12,5 million VND (about 468 USD) for her post, while the man who claimed the first death had been covered up was detained for five days. Another woman who suggested that garlic could treat COVID-19 was fined 12,5 million VND in March.

Fines reaching 30 million VND were designed to make people reconsider before posting sensational news on social media, but as of March 2020 over 654 people had been fined for spreading fake news regarding the COVID-19 in Vietnam.

Misleading information and disinformation were mainly tackled by newspapers and TV channels since they first surfaced and spread. After consulting with local authorities, those people who spread these hoaxes were fined or interrogated at police stations for their motivations. The process was quick and clean enough to take down the fabricated information in a timely manner with detailed information from several related sides of the stories. Newspapers’ promptly information screening has coordinated effectively with immediate response from the authorities to minimize the harm of misleading and fake news, such as preventing the hoarding rush for groceries or purchasing the Covid-19 “vaccine” online.

Concerns toward Freedom of Expression
Although quashing fake news has been an important part of the response to the pandemic, human rights activists and freedom of speech organizations have expressed concern that the pandemic has also created an opportunity for Vietnamese authorities to crack down on the young and vulnerable freedom of speech in a totalitarian country.

Only in six months since the pandemic started in February 2020, several prominent bloggers and independent journalists have been detained on “anti-state” charges. Journalist and writer Pham Thanh and several other independent bloggers are charged under Article 117 of the criminal code, of “opposing the state”, and “making, storing and disseminating documents and materials for anti-state purposes”.

In the normal time, these arrests were used to catch the EU or US’s concerns. However, the pandemic turned out to be a good chance for political suppression toward freedom of expression. The overwhelming destructive capability of Covid-19 puts public attention on the other stage, in which economic downturn and death rate are more important than some detained journalists. Almost every month there were some journalists who were arrested, including Pham Thanh, a prominent blogger who publicly criticize the Vietnamese government on corruption and dictatorship. (5)

In September 2020, the New Yorker Magazine published a case about Patient No.17, (5), who flew from London to her home in Hanoi and was infected and brought Covid-19 home. Although the media wrote about her as “Patient no.17”, her private information such as home address, full name, parents’ names were released as documents in the first press conference. As a result, just some hours after the briefing, her identity was spread online and sparked a surge of public shaming on her family. When she was recovered and talked to The New Yorker, the social channels orchestrated by the government intentionally attacked her for several weeks, labeled the young woman as “the ungrateful bitch”. Public shaming was an intentional tool that state-owned social media channels used to control and drive public attention to government’s purpose.

Vietnam often ranks low in the global press freedom index. The government has taken drastic action against the freedom of expression and independent journalism in 2020, coinciding with the pandemic. About 25 journalists and bloggers are being held in Vietnamese prisons. At the same time, widespread monitoring of online activities has been accepted by many citizens, justifying the need for a strict media crackdown to prevent fake news about public health. The pandemic seems to give Vietnamese government a useful hand to suppress independent voices and new-emerging non-mainstream channels.

Author: Khai Don is an independent journalist covering Mekong Region for regional news agencies in South East Asia. She published ”Mekong – The alluvium’s pilgrimage” – The nonfiction essay book about people living in the Lower Mekong Basin in the time of climate change and water tensions. She is currently a Fulbright Scholar in Creative Writing in San Jose State University.

*The views and opinions reflect in this article lies solely with the author.