Vietnam witnesses on average 10 cases of violence, threats and obstructions against journalists each year, even though the country is no longer at war and there are no ethnic or regional conflicts at present, according to my own observation. The majority of attacks are aimed at investigative journalists. In recent years, terrorism and threats haveextended from the journalists themselves to their families.

On 6th November 2016, a reporter from VTC and a beat reporter from Vietnam Law Newspaper were hospitalized after being cornered and beaten by a group of gangsters while they were collecting information at a slaughter area in the suburban district of Thanh Oai, Hanoi.

On 23rd March 2016, reporter Do Doan Hoang from Labor Newspaper was beaten near Kim Lu Apartment Building in Hoang Mai District, Hanoi. He was rushed to hospital with serious injuries and a crushed finger. On 11th March 2018, reporter Hua Vinh Nhan from Traffic Newspaper was locked up and beaten for two hours after visiting Lost & Found Bar in Hai Chau District in the central city of Da Nang to collect information for a story.

On 2nd April 2019, two reporters from Lam Dong Newspaper and the Vietnam News Agency office in Lam Dong Province were attacked while collecting information at the Center for Management and Exploitation of Public Projects in Da Huoai District.

What’s most concerning about these attacks and threats against journalists is that they have become more sophisticated, blatant and reckless. The assailants are brazened and openly challenge their victims, rather than taking a more subtle approach, and sometimes they are government officers such as police and administrative staff. 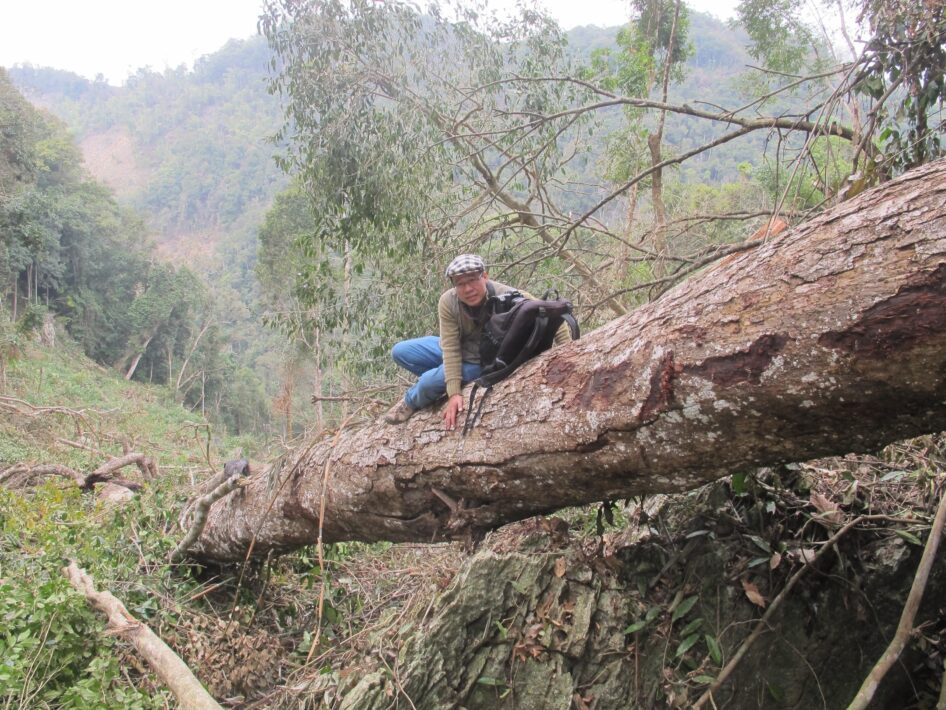 Do Doan Hoang conduct an investigative report on illegal logging. He was once beaten with a crushed poiting finger as a warning of having no chance to continue writing while he was trying to report on a violated construction project. – Photo courtesy provided by Do Doan Hoang.

This situation has been exacerbated by the lax manner in which attacks against journalists are handled in Vietnam. Many cases have even been brushed under the carpet until the victims eventually fall silent.

In theory, Vietnam has laws and regulations to protect journalists, but many attacks are not strictly handled due to loopholes.

In many cases, the perpetrators are merely fined. For example, in the case of two reporters from Long An Radio & Television Station and Long An Newspaper who were assaulted at Tam Sinh Nghia waste treatment plant and suffered serious injuries, the two violators were only fined VND750,000 (USD33) each for ”fighting”.

In Vietnam, the majority of journalists are state officers. However, their professional activities are not considered “on duty”, which would be the basis to convict an assault for anti-public service behavior. Punishments for those who assault journalists are inadequate while each local authority has a different method of handling these cases, making it nearly impossible to prevent the situation.

In the case of three journalists in the Mekong Delta province of Long An, local police concluded that they were not “on duty” because they had failed to provide a detailed working plan to local authorities in advance. It was claimed that they failed to introduce themselves as journalists when approaching people working at the waste treatment plant, or wear clothing bearing the logos of their media houses. Regardless of the evidence that showed the investigative storythey were working on had been notified to authorities as part of the working plan of their media houses, the assailant received a penalty of just VND750,000 (USD33) from the police. 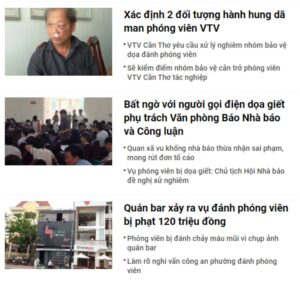 In a clash between police and journalists in Hanoi’s suburban district of Dong Anh in 2016, Tran Quang The from Tuoi Tre Newspaper was punched in the face by an undercover police officer. Despite a video capturing the obvious act ofviolence committed by the officer, the head of police in Hanoi claimed his officer had just been gesticulating and caught Tran Quang The in the face accidentally. Another officer smashed other reporters’ cameras. Two officers caught red handed in the video faced the punishment of reprimand. They received a notice of VND14.4 million (USD660) for accessing state secret without permission, taking photo in a restricted area, insulting public service officer and obstructing legal activities of individuals and organizations.

In addition to this bitter treatment, Vietnamese journalists face another roadblock known as “sweet obstruction”. The real threat of violence has failed to succeed in forcing journalists to step back from doing their jobs, but silence has pushed them to a dead end. In many cases involving corruption of state officials, it has been impossible to get an official comment from authorities, and reports in the media have received no response or action from relevant agencies.

Very often “confidential information or state secrets” are used as an excuse, blocking the media’s right to access information. The majority of investigative bodies including the police, people’s procuracy, government inspectorate (the Party’s inspection agency) do not provide any information to the media unless they have an approved written document.

This common issue has suspended many investigative stories.

The Law on Press in Vietnam regulates the responsibility of state agencies to provide information and respond to the press. The reality, however, shows that many agencies put up a spokesperson for decorative purposes only. Journalists often cannot reach the spokesperson or receive valueless information. These spokespersons are bound to no accountability if they fail to comply with their roles and responsibilities.

I think this “restricted area” of information is one of the mental tortures journalists face doing their jobs. Thus, it blurs the role of social criticism in the media in Vietnam.

*Author: PHAN VAN TU – born in 1965, Tu is a veteran journalist with more than 30 years active in the media. He has been through different positions from reporter, editor to manager in many platforms such as print, radio, TV and online. In recent years, he has a series of researches published and books used for training. Tu is now heading Journalism at Faculty of Journalism and Communication, University of Social Sciences and Humanities Under National University – Ho Chi Minh City Campus