December 22, 2020, saw the arrest of the four members of Press Club Belarus. Later they were accused of tax evasion and could face up to 7 years in prison. Almost 8 months later, on August 19, 2021, the team was released without any trial to the joy of their families and friends and the scepticism of some critics. Press Club team shares their stories of life behind the bars, the ideas behind their release and the importance of the simple joys of life.

Yulia Slutskaya, the founder of Press Club, Sergey Olshevskiy, its managing director, Alla Sharko, the deputy director, and Peter Slutsky, the cameraman, tech guy and the son of Yulia Slutskaya were considered as political prisoners. Although they have been among the first few media professionals who went to prison for doing their job, their release sparked some criticism: according to the initial Press Club Belarus information, all four of its members were granted a pardon, a measure that was considered a sign of weakness by some of those who oppose the regime. Others, however, questioned the whole idea of a pardon given to those who did not face a trial and were not convicted.

Pardon to the non-convicted

In her first interview after the release, Yuliya Slutskaya explains, “There is an article in the Criminal Code which provides for a criminal case to be terminated upon an admission of guilt and two-fold repayment of damages. I thought about this proposal for a long time and did not consent, but then I saw that we were stuck and there was no end in sight; that it was completely useless and pointless. The admission of guilt does not require us to incriminate anyone but ourselves. We will survive this because we are intelligent adults who understand what is happening. We just had to get out. It was my decision to make, so I made it and asked the team to listen to me and accept it. We all had friends and relatives waiting for us and suffering alongside us all these months. However, it was still not an easy decision to make.”

Back in December, the Press Club Belarus was accused of tax evasion. Allegedly, the organisation used a simplified taxation that it was not eligible for because it rented out the Press Club premises (although the organisation worked and organised events in the same space thus being eligible for the simplified taxation). Yuliya continues, that their admission of liability looked like “we worked, held events, acted within the framework of our mission, consulted with accountants and lawyers, paid taxes and were sure that we were not breaking any rules. However, if the investigators believe that there are violations, we are prepared to admit guilt and pay compensation. Following that, we drafted a petition for pardon.”

The compensation paid by the Press Club Belarus included all the funds on the organisation’s account as well as the money that Yuliya’s daughter received from selling real estate.

Lawyer Sergey Zikratski who’s known in Belarus for working on cases of the detained media professionals, commented on the pardon given to the Press Club team, “Based on initial reports, the Press Club staff are ’out on pardon’. Therefore, what happened yesterday is illegal. Under Article 96 of the Criminal Code, a pardon is granted to a person convicted of a crime. None of the people who came out of the detention centre yesterday were convicted. The authorities first break the law when they throw people behind bars and then break it again – to release them. Why? Because they are trying to gamble with us, they are trying to place a bet and guess the price of our satisfaction.”

Alla Sharko was prepared to meet her Birthday (August 24) in the cell. Press Club has initiated a celebration campaign asking its followers on social media to send letters, postcards, and telegrams (yes, good old telegrams) with birthday wishes to Alla and posting some of her prison drawings on their social media.

She confesses, that during that whole time she has received 640 letters, postcards, and telegrams, along with 40 parcels from both people she knew and complete strangers. However, many of the letters never reached Alla.

Alas, writing letters to political prisoners and other opponents of the regime is a new national hobby of the Belarusians, although much of the correspondence, however innocent the information there may be, do not reach the addressee. For instance, Yuliya had received very few letters throughout the 8 months of her imprisonment.

No wonder that one of the first things Alla did upon her release was sending letters to her former inmates and friends that are still behind the bars. 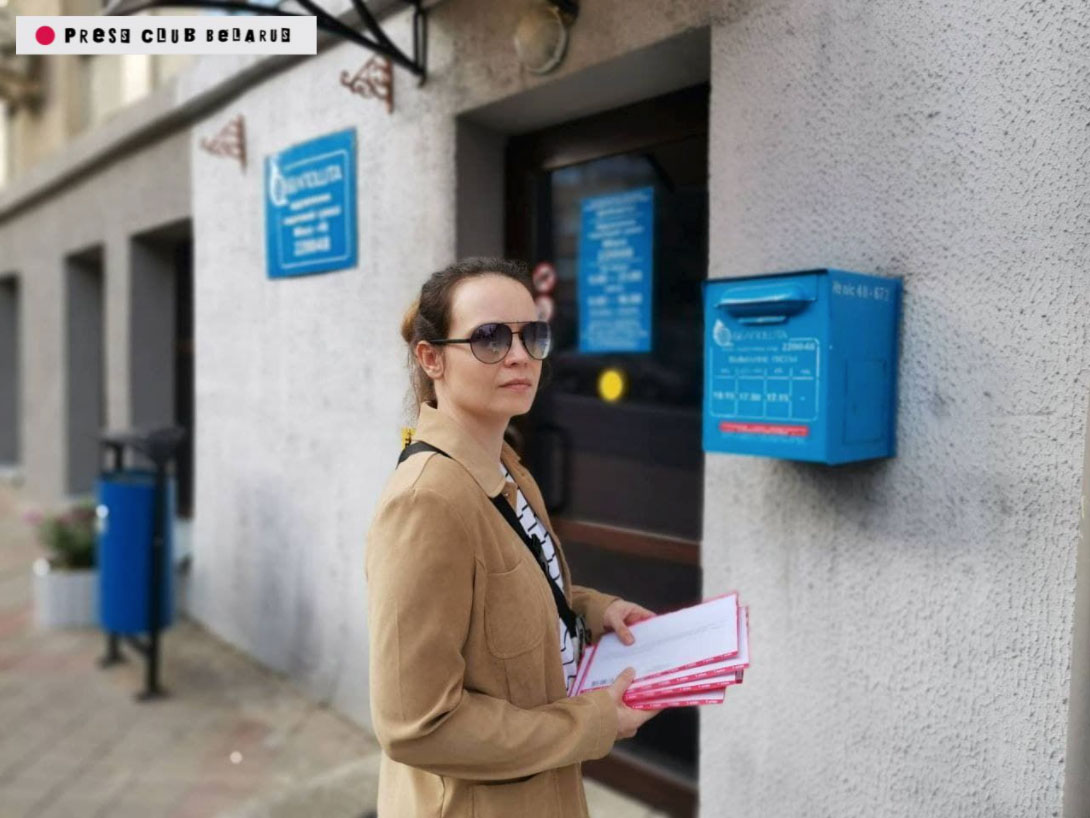 She states, that “it was difficult to be outdoors at first. My eyes got unused to the bright light of day. Even at home, I wore sunglasses. At first, I could not even look at the blue sky. At the sky without several layers of bars, nets and barbed wire. I was shocked to see green trees – back in the detention centre, you could only spot some green outlines when you were taken through corridors. It was a very difficult time in my life. It’s a hell of a time, not only for the one who is in jail but also for those who are waiting. We got through it somehow. It won’t be the same anymore, it will be different. But I don’t want to forget this experience.”

Son as a hostage

Experience of the Belarusian prison changes from cell to cell and from person to person. Yuliya Slutskaya had her share at the very start of their detention. She recounts that her first interrogation lasted almost 36 hours and she (just like the rest of the team) had no legal representation. “The interrogators rotated, but I was there the whole time without a break. Again, I knew that in theory, I should say nothing beyond ’yes’ and ’no’, but I said more because I was telling the truth. How could that be dangerous? At that point, you don’t realise that anything you think is a crime or a violation of the law can and will be brought against you. At one point I simply refused to talk because I was already having trouble controlling my thoughts. Then they let me sleep for an hour at the table with the lights on. I am still aghast by those first 36 hours.”

Later, Yuliya was also shocked to find out her son, Pyotr, was also detained. She says, that as a cameraman and sound engineer, he had nothing to do with financial affairs and thus was simply a hostage. He was placed in one of the worst cells in the prison – the so-called “Shanghai” – located in a perpetually damp basement where 25 men occupy 30 square meters on three-tiered bunks. In that cell, cigarettes went mouldy after a few days. Rats and cockroaches ate the bread and sausage brought by relatives. “Compared to Pyotr, my conditions were excellent – only eight people in a 15-meter cell. We had two-tiered bunks and lived like royalty”, continues Yuliya.

One day before the release of the Press Club team, the authorities have raided the oldest private news agency Belapan, taking the physical servers with Belapan websites and information and arresting the editor-in-chief, the former administrative director, and accountant of the agency.  This was one of the reasons that fueled a fierce discussion on whether one should bargain with the regime while the latter continues crackdown on media and civil society and has hundreds of people imprisoned for political reasons.

Today all four released members of the Press Club Belarus try not to plan too far ahead: this is family time and the time for taking care of themselves.

As of the date of the publication (August 30, 2021), there are 650 political prisoners in Belarus 27 are journalists and media professionals.

The author would like to thank the Press Club Belarus and Nasha Niva for providing materials.