Reporting the lives of indigineous communities

The reindeer herder has been talking about his work, how the days are long and often tough, and that he would never choose anything else for a living. Then he pauses. When he starts to talk again his voice is lower.

He tells us about the hate and threats against the Sami people that have become commonplace. He says it sometimes feels as though no one reacts or tries to do anything about it, and nobody is reporting the problems the Sami face in the media.

He’s speaking not only as a Sami representative, but also as a dad. He tells us about his daughter, who recently got her first job:

”Her colleagues take the opportunities to call her ’Lapp’ and to sneer her for her descent. But she is young and too new at work to tell her boss. You don’t want to risk your job or make the harassments worse.”

This might be the moment that will stick in the minds of the 12 Fojo students spending a  week in Kiruna, the northernmost town in Sweden. It is just one of several similar stories that are shared, but it illustrates how hate and threats are always present for the indigenous people in Sweden.

In January 2020 a unique verdict was pronounced in a Swedish court. More than 10 years ago the Sami community of Girjas Sameby brought an action against the state for exclusive rights over small game hunting and fishing in the area. The district court supported the Sami community, but the verdict was appealed twice and for 10 years it kept the Swedish courts busy before the Supreme Court finally ruled that the Girjas hunting rights be restored.

That is the reason why the Fojo students were spending time in Kiruna and its Arctic surroundings, meeting Sami representatives and other members of the community of Kiruna, along with legal experts and researchers.

As the court verdict approached, hate and threats to the Sami people were evident, mainly on social media such as Facebook, but also in comments added to articles published online. The media also reported about a growing hate, how reindeer herders and their animals were attacked, mostly verbally but sometimes violently. 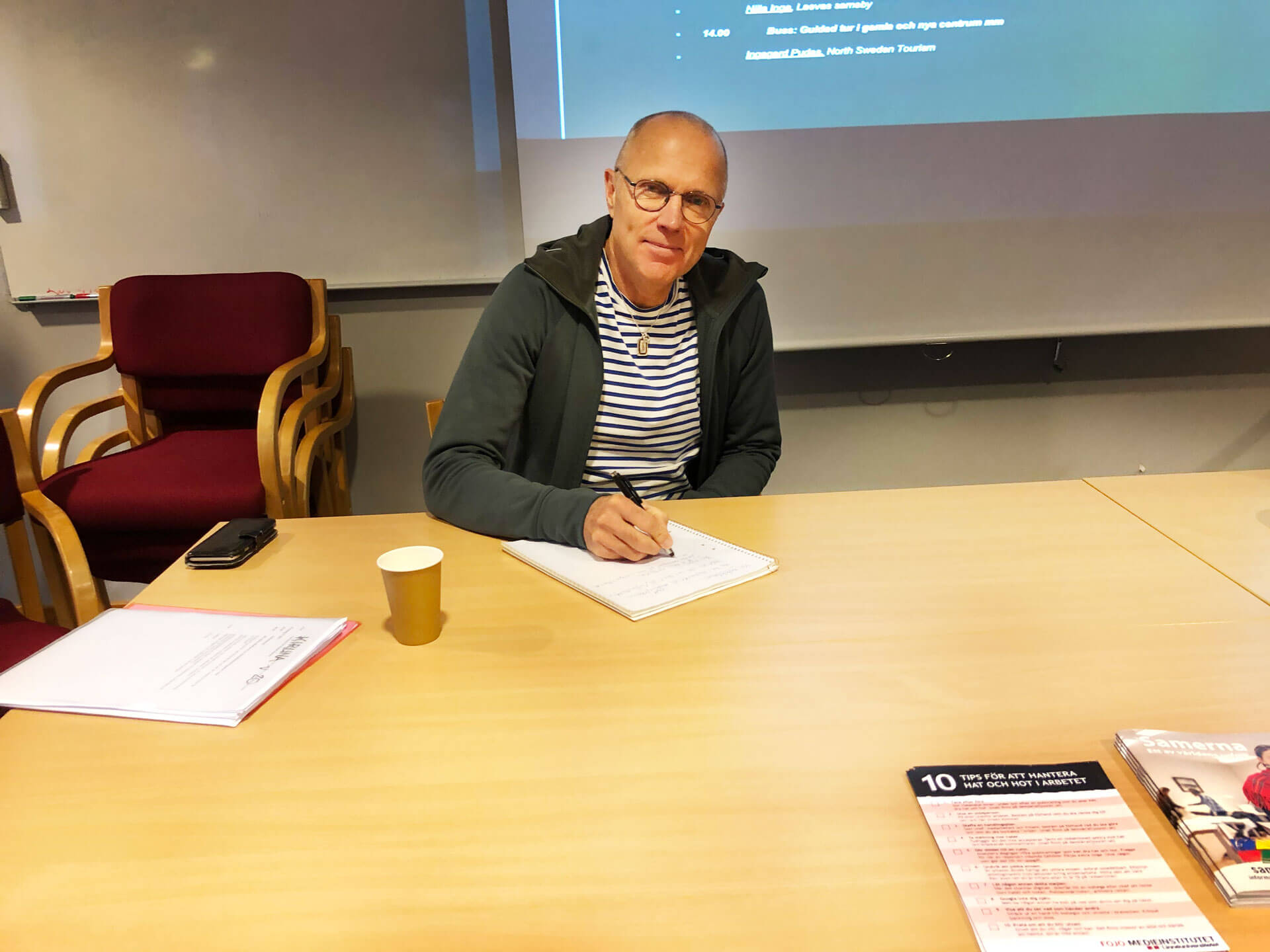 However, according to course leader Bertholof Brännström this is not a new problem in the region. He says there is a history of conflicts between different cultures and interests, but that it “seemed to escalate after the verdict, and that is why Fojo found it so significant to offer journalists an education about the Girjas’ verdict and what has happened after that, but also about Sami conditions”.

Brännström loves nature. At university he studied the Sami people, and for 40 years he has followed and reported on their culture, and about reindeer herding, hunting issues and nature. During that time he has accumulated a great deal of knowledge about such subjects and knows how complicated it can be to understand how it is all connected.

”As far as I have learned, Swedish journalists in common aren’t very well prepared for these issues. That is why we decided to go all the way from the history to today’s conflicts, but also talk about climate changes and of what happens when the mining expands and the urban needs more place while reindeer herding still needs its space”, he says.

Some of the Fojo students have been reporting about these issues for several years, some are local and some are of Sami descent. Others have never travelled so far up north nor have they seen a reindeer in its natural environment. The lack of knowledge is an indication of how little the media in the main part of Sweden reports on Sami rights – even though they were declared as indigenous people in 1977.  Brännström says this knowledge has to be spread far wider, so that journalists can report on Sami affairs accurately.

As a former editor-in-chief of the Swedish journalists’ trade magazine Journalisten he is also eager to talk about the ethics of journalism and the role of the journalist. When a journalist hears the heartrending stories about the Sami people and learns more about their lives, they still have to do their jobs as reporters, he says:

”As a journalist it is important not to just take the culture to your heart, but to problematize and also listen to the other side. For example, it is too easy to see all Sami people as reindeer herders, although many of them don’t even have those rights. It is not a homogenous group, you have to see all as individuals.” 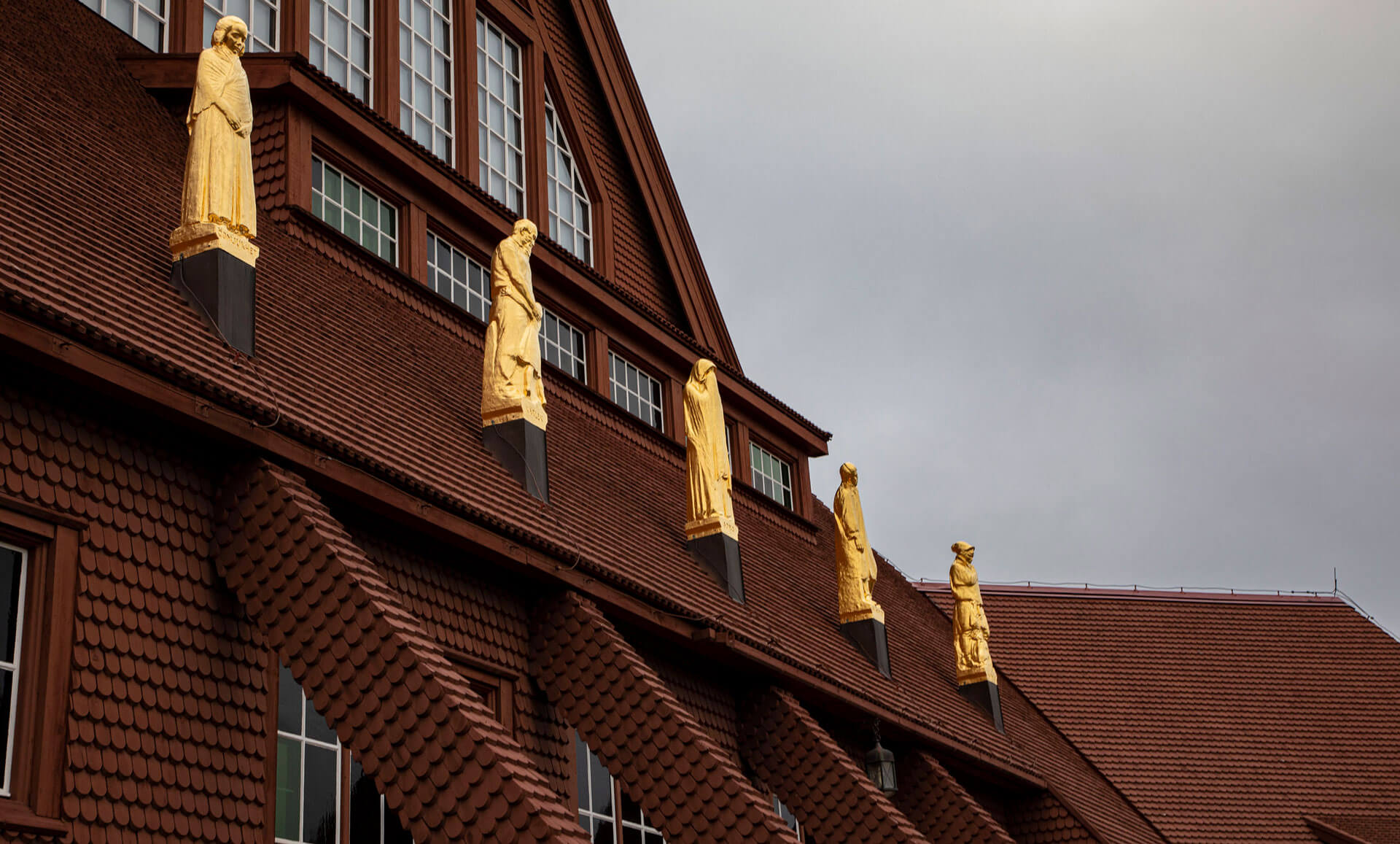 Golden statues on the old church in Kiruna. Relocating the church due to the geological instabilities will take years. Picture by Jesper Nilsson

Kiruna has had to move because mining has led to geological instability. The guide on a city tour for tourists tells us that the old church will take years to relocate. She points out the new urban districts where modern buildings will be mixed with the older ones. She talks about Kiruna’s mining, tourism and space research. But she doesn’t mention the Sami people and how moving the town affects reindeer herding. One of the Fojo students suggests this is normal for the region:

”Our guide is typical of the people living here, not mentioning the Sami and not finding them important or a part of the neighbourhood. It is like they are invisible.”

Climate change is obvious here, and it’s affecting reindeer herding as the animals have problems finding food under the ice. To prevent the reindeers from starving the herders feed them pellets. It’s expensive and the reindeer stomachs aren’t meant for that kind of food. Also, if the ice on the rivers doesn’t bear their weight the reindeers cannot cross as they have always done during winter. Nowadays reindeer herders sometimes use trucks to transport their animals instead of letting them wander as they always have. It has become clear that for the reindeer winter is about surviving.

”In the past six to seven years climate change has become so obvious”, says Anna Sarri, owner of Nikkaluokta Sarri lodge that hosts tourists exploring the area.

People arrive here to start or end a journey, maybe reaching the top of Kebnekaise, the highest peak of Sweden. Anna Sarri asks the journalists in the party not to call the area “the wild”.

”Please don’t use that word when you talk about this nature. My people have been here for several generations, and we have names on all the mountains, lakes and valleys. When you call it wilderness it is quite hurtful, as if we were savages”, she explains. 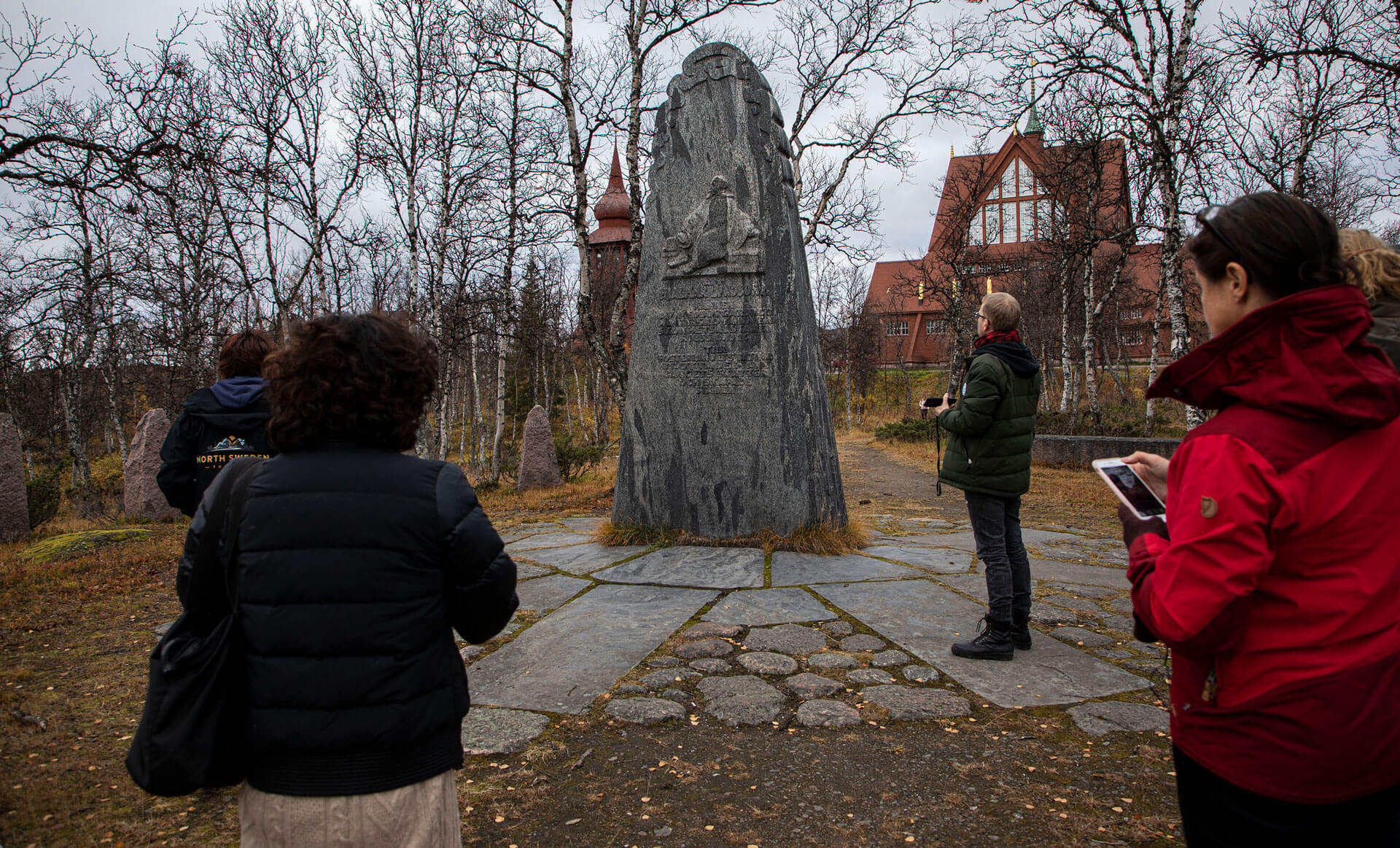 How the Girjas’ verdict will affect the area in the longer term remains to be seen. The game hunting season was postponed for a couple of weeks to protect nature and animals, but small game hunters have after that been able to buy a hunting pass.

How the moving of Kiruna will affect different interests and the closest Sami community is another issue, as is whether the threats and hatred continues. But at least 12 journalists have now been prepared to report on the issues faced by the community, and perhaps Swedes all over the country can expect to read more stories from the region. 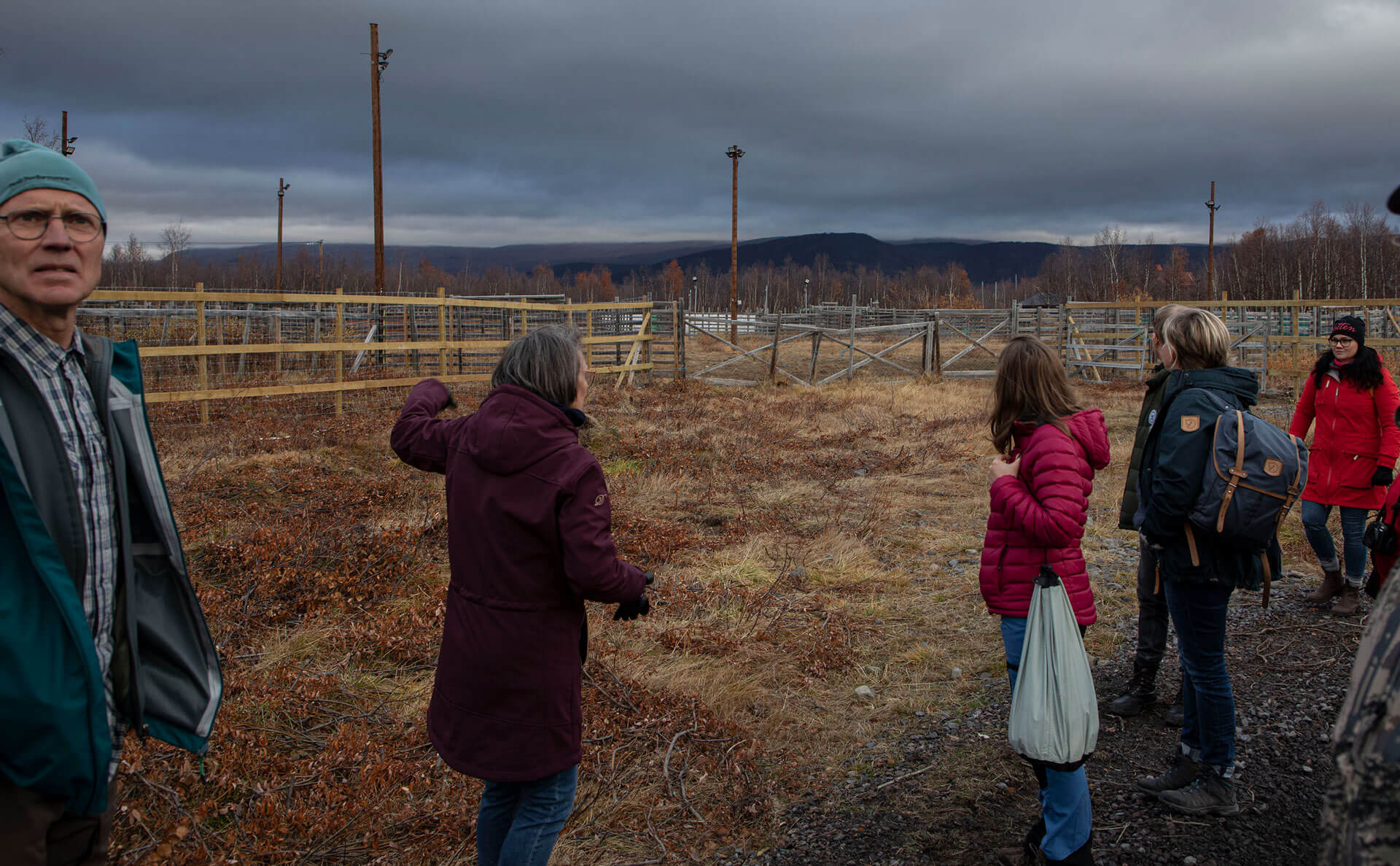 Brännström says he is impressed with the interest shown by participants, even long after the course. “They keep sharing knowledge and questions even months after the education and even though I have been educating for several years I have hardly ever seen that”, he says.

”It is a pleasure seeing most of them are prepared to keep reporting and that they are still focused on the issues. That is important as it now seems like Girjas’ verdict might be followed by more Sami communities who would like to get the same rights. That means there will be even more for us to report.”