Hem/Nyheter/Myanmar: The Right to Reporting during the 2020 General Elections

Transparency is a vital indictor recognizing whether an election is free and fair or not. To know how transparent Myanmar’s 2020 election process is, it is necessary to scrutinize the degree of access to information for journalists who covered the progress of the polls. As a journalist, I would like to analyze the process of covering election reporting stories during pre-election period, on the election-day, and post-election period.

The Union Election Commission (UEC) has declared that it will run the process by five standard principals. “The elections must be free, fair, transparent, and publicly trustworthy and the election results must be identical with people’s desire,” declared U Hla Thein, the chairman of UEC, during a meeting with political parties and journalists on 27 June 2020.

Denial of the right to reporting

The Myanmar Press Council (MPC) had received 16 complaints concerning denials of access to information at some voting centers throughout Myanmar. Three cases had been solved out but thirteen cases could not resolve with the respective officer-in-charges of the voting centers on ground. Those complaint cases had been sent the UEC’s union level in order to address but in vain with negative remarks.

Back in 2015 General Elections, journalists were allowed covering news only for ‘township-level’. But, in 2020 General Elections, the system was differed from 2015 and journalists were allowed district level, according to UEC authorities’ speeches during press conferences. As said by the UEC’s announcement concerning the reporting license, a journalist can re-submit his application to respective district election commission office, if he/she wants to cover more than one districts.

There was a case to be recorded in the beginning. The Myaylatt Voice, a regional news outlet, had been lost its access to information during the 2020 general elections. The Myaylatt Voice based in Pyay Township, 260 km north-west of Yangon, and its reporters had been submitted applications for licenses to cover election news at the respective district office. However, they were refused submitting their applications.

Ten reporters from ‘The Myaylatt Voice’ applied for their district-level reporting license at Pyay-district election commission office in order to get access to information in 6 townships during the November 8 elections. According to the district election commission’s response, they were not allowed to submit applications for the district-level, but for township-level, means only one township instead of 6.

When they received the response from the Pyay-district election commission, two reporters from other news outlet had already obtained their certificates for district-level licenses, according to the public announcement made by ‘The Myaylatt Voice’.

The case of journalists from ‘The Myaylatt Voice’ for the denial of their district-level license applications was still unresolved even though they sent complaint letter to the MPC. There was no response as yet. 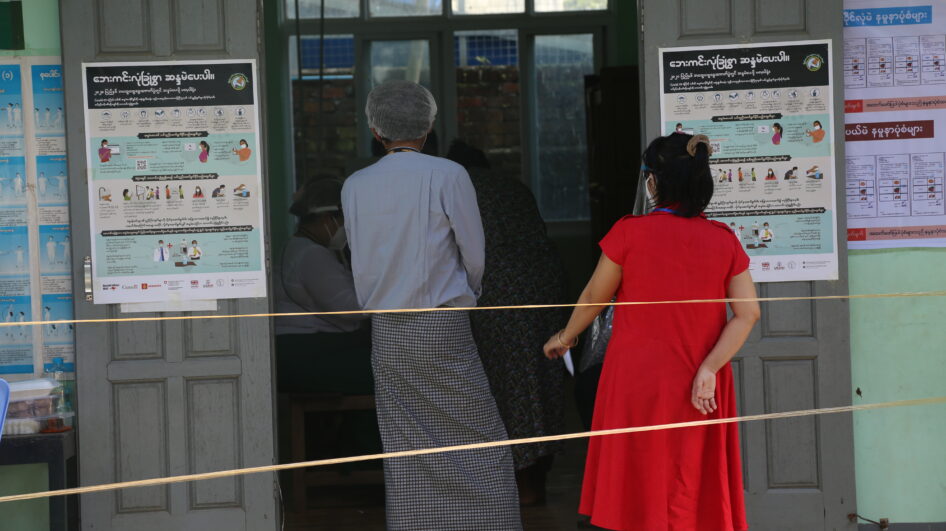 The set-up of voting stations are journalists unfriendly, even to cover from outside of voting area [Credit: Thingangyun Post]

In addition, there was a public announcement released by UEC two days ahead of ‘Election Day’ on 6 November. In their statement, in line with the Article 48 of UEC’s by-laws, the video-cameras, smart-phones or recorders were not allowed in the precincts of the voting-centers in order to protect the privacies of the respective voters.

However, there were oral instructions by UEC members that the above restriction should not be concerned with the media personnel. On the other hand, 11 out of 16 complaints to MPC are made by journalists who were not allowed getting access to information or covering news in the precincts of the voting-centers. Another five complaints were made by journalists who were not allowed to cover news in the vote counting periods.

There were many complaints submitted from, at least 8 regions across the country, such as Tanintharyi Region, Rakhine State, Shan State, Yangon Region, Nay Pyi Taw Region, Bago Region, Kayin State and Mandalay Region.

The United Nations Educational, Scientific and Cultural Organization (UNESCO) and the Myanmar Press Council (MPC) had made a joint-discussion forum on election-reporting together with representatives from UEC and around twenty journalists from various areas. Prior to the forum, the MPC had launched the 2020 Election Guide Book in order to introduce with the media circles. During the forum, the presentations and discussions made by the UEC were not different from the facts mentioning in the Guide Book.

The UEC led by Chairman U Hla Thein and the MPC had met several times for discussion to publish an election guide book. In addition, some international media organizations also contributed advices in this guide book as said by the introduction of the guide book.

Yet, the strengths and weaknesses of the election guide-book were not clearly seen prior to the 2020 General Elections. However, on the election day, journalists were in difficulties due to complicated and ambiguous articles mentioning in the guide book. There were some limitations towards journalists’ rights to reporting and/or access to information.

As the 2020 General Elections had been launching during the second-wave of Covid-19, the preparation and setting of the voting process were different from a conventional election. As soon as they stepped into the voting centers, the voters needed to wash their hands with sanitizer and put on masks and face-shields offered by the ballot stations. Then, they could cast their votes in accordance with voting instructions.

Before the election started, there was an interview with the chairman of Thingangyun Township Election Commission. According to him, the numbers of ballot-stations in the Covid-19 period elections were the same as 2015 General Elections.

Even though the respective authorities of election commissions had alerted for social distancing, there were crowds in some voting stations which situated at school-buildings for numerous voters. For instance, one voting center at a local school-building in ward (A) of Thingangyun Township, there were 11 ballot-stations in the same compound. The result was, more than ten thousand voters appeared as a big crowd to cast their ballots.

When the reporters did their reporting duties of taking photos and videos towards that significant crowds waiting for their turn to vote, most reporters faced with restrictions from the commission authorities. The authorities did not want the media reporting the masses linings up.

A freelance TV journalist Htein Htein Linn, reporting from Pyin-oo-lwin District in Mandalay Region, reflected her experience saying the authorities were determined to block the media who might cover the stories of the crowed ballot-stations. In Pyin-oo-lwin, there are many ballot stations for the voters from the military. 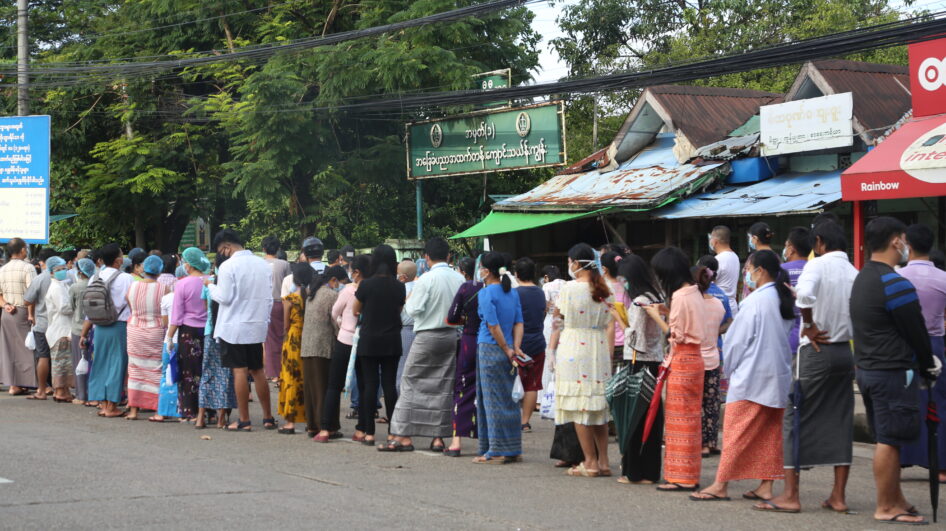 A long-line of voters in front of the high school in Thingyangun waiting for their turn to vote [Credit: Thingangyun Post]

There were several lessons to learn concerning access to information during the 2020 General Elections. Compare to the 2015 General Elections, there were a number of limitations covering election news stories due to the second wave of Covid-19 Infection. Journalists could cover voting situation within the boundary of rules and regulations made by the UEC as well as the respective Covid-19 controlling committees.

Even the established news agencies cannot send their reporters across the country as there were compulsory disciplines or code of practice to be quarantined at least seven days to avoid the spread of Covid-19 infection. As a result, the media could not cover election news sufficiently or timely, in many areas due to quarantine restrictions.

In 2015 Elections, there were more LIVE broadcasting about ballot-counting situations via TV Stations and Online Channels. As a LIVE broadcasting has been developing, it is easy to cover news stories lively on time. However, the 2020 reality ended up as journalists having arguments with ballot-station officers to allow the LIVE reporting.  And, there were 5 complaints submitted to MPC for not being allowed to do the reporting. Though there were a few LIVE reporting available, it didn’t represent the actual reporting situation on the ground.

No answers for baseless questions?

It should not be put aside the 11th November Press Conference made by the UEC which uttered especially on rights to information concerning the 2020 General Elections. The said press conference had noticeably echoed among the media workforce and the public as well. It also spotlighted the situation of UEC relating to access to information or press freedom in election time.

In the 2015 General Election, the UEC had a good relationship with the media community. The then UEC Chair U Tin Aye himself attended some media forums and answered every question made by the journalists.

The current UEC members are different from the previous one and its members were not professional even in official press conferences. They were ineligible as they even intended to take legal action against the media. Besides, there were some situations in which UEC threatened journalists with a law suit of blocking an official duty, for the interview permitted by a concerned chief of ballot-station. As a union level official team, UEC members seemed improper, impolite and unprofessional for their communication purpose.

Lessens should be learned willingly

The facts collected from the journalists, who were banned covering election reporting, revealed that each and every level of election managing staffs did not understand equally enough about “Access to Information or Rights to Information” concerning the general elections.

Facts on ethical reporting are mainly mentioned in ‘The Election Guide Book (2020)’, however, the Election Guide Book (2020) mentions only one point concerning access to information for practical journalists on ground in article 3 of chapter 3. It says that on the voting day journalists have the rights to covering news in the voting centers except voting-room by using their media equipment without disturbing secret voting.

The weakest point is– no clause is clearly mentioned about the rights for media or journalists to cover news at the ballot-station closing hour (4 pm) and ballot-counting hours. Consequently, situation of ‘Press Freedom’ or ‘Access to Information’ during the 2020 General Election seems narrower than the previous one in 2015. The restriction for election-watch organizations are also tighter than 2015. An internationally recognized election watch-groups were denied even before the 2020 Elections.

During democratic election times, media is the best measuring tools for ‘transparency’. As a responsible pillar for free and fair elections, the media community has a lot of questions concerning press freedom, specifically on ‘Rights to Information’. The last meeting with the media or the UEC’s 11th November Press Conference has been renounced by several media organizations due to lack of transparency. As a result, questions on transparency issue mentioning in the five standard principles of the UEC needs to explain furthermore.

*The views and opinions reflect in this article lies solely with the author.

*Htet Htet is a founder and editor-in-charge of the Thingangyun Post News Agency in Yangon, Myanmar. She covers articles on politics, social and women affairs, different sexual orientation issues, human rights and peace. She also covers news on the recent 2020 elections. She has been elected twice as an executive committee member of the Myanmar Women Journalists Society (MWJS) which targets women journalists’ affairs. She is currently working as the first secretary of MWJS.