The messages reflect the ”awareness” and “needs” on the gender-based issues in the respective communities. Without nurturing those aspects, the issue will not go away. The campaign intends to share these messages to be part of readers’ daily insights and reflections on the gender-based violence and harassment issues, while hoping to promote social justice, and gender equality by providing the diversity’s expressions.

21 individuals of 13 women, and 8 men participated from Myanmar’s 8 regions; Kachin, Kayah, Karen, Chin, Mon, Rakhine, Shan and Yangon. Most of them (16 participants) are journalists and media trainers, and the rest are activist, lawyer, writer and politician.

The root-cause of Gender-based Violence and Harassment (GBVH) lies in ’Gender Inequality’ and ’Gender Insensitivity’, while ignoring the existing issues to accept and find solutions.

Many have shared how much more education on Gender Equality and Gender-based Violence & Harassment (GBVH) is needed urgently in the respective society. Also, many areas to tackle the GBVH issues have been lacking, such as education and public awareness on knowledge about laws, legal procedure, and accessing protection mechanisms.

In their messages of GBV, participants share general pattern on physical and mental abuses. Nowadays, the most problematic issue of GBV is ‘Online Harassment’ (or) ‘Online Violence’. 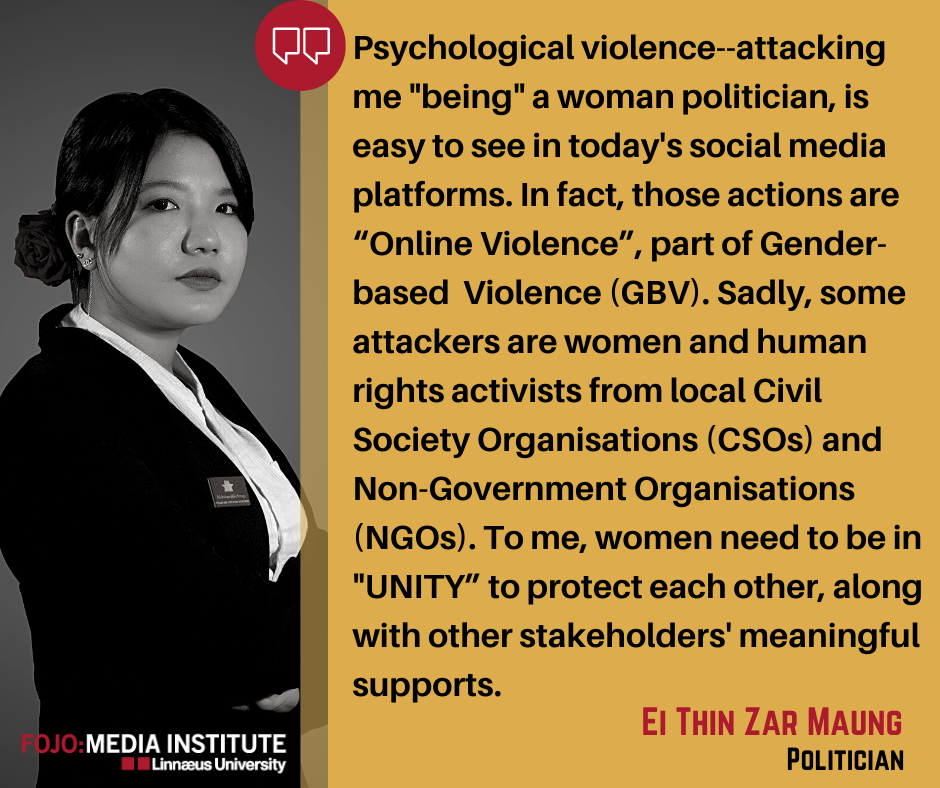 In the campaign, participants based in remote areas highlight usual gender-based violence such as judging by the traditional and cultural norms of the society, and reactions of victims blaming from the society. Such reactions halt the victims from speaking out their suffering to the public in search of justice.

“In Chin State, the Case of Gender-Based Violence (GBV) was normally hidden, as victims fear blameful reactions from the society. And, they avoid journalists to talk. That challenges us to cover rape cases without the victim’s testimonies”, says Salai KT Haukhai, a multimedia reporter with Radio Free Asia (Burmese service), based in Tedim of Chin State.

In the conflict-torn Rakhine State, the internally displaced people (IDP) are suffering from various difficulties of gender-based violence and rights abuses issues. There are a few IDP camps in Rakhine State in which a lot of women and children are staying.

Ei Soe Phru, a senior reporter of Narinjara News from Sittwe of Rakhine State, highlights her perspective, “I think we should put an emphasis on their plights under gender-based human rights issues”. 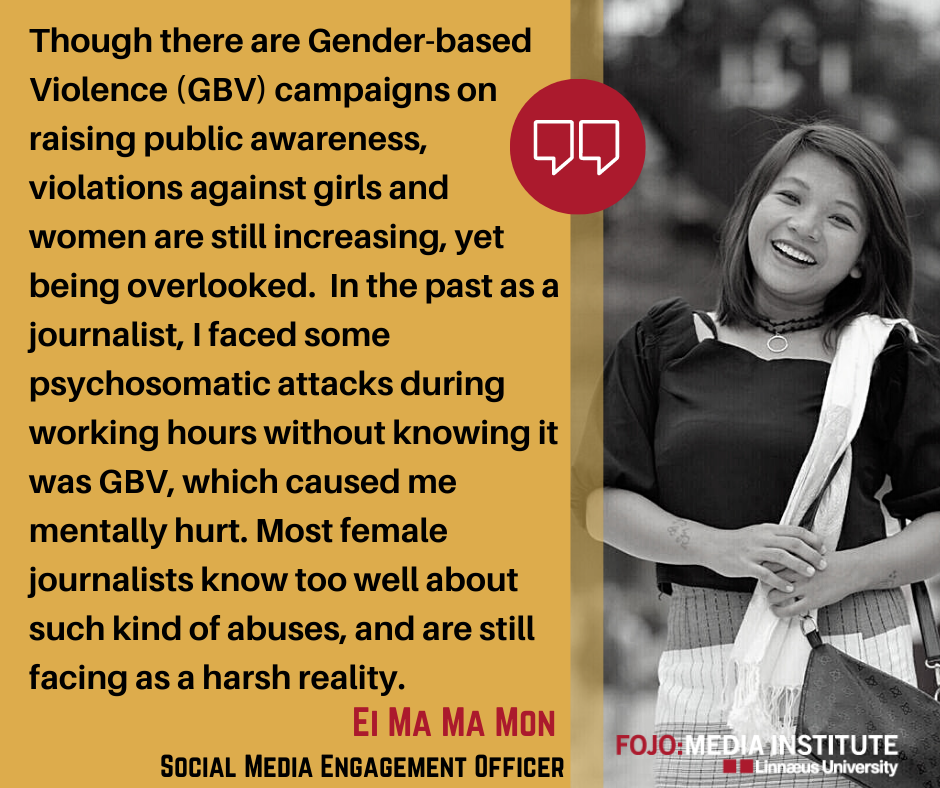 To reduce GBV crimes, Nandar, a feminist advocate takes that it is necessary to educate both women and men to think that violence is not an option to build peace or a better relationship.

Almost every participant reminds the importance of public’s and self-awareness on the subjects of gender and gender-based violence, with the understanding of laws and legal procedure. Meanwhile, they call for the government to provide a legal protection and support system for victims.

Nowadays, there are more civil society groups (CSO) working towards raising public’s awareness on gender issues, yet it is not enough. Kaung Mrat Naing, a freelance reporter based in Rakhine State (Sittwe and Maungdaw) says, “The government is weak to take action by enforcing the law. It’s not effective to raise the public awareness only by a handful of gender-based organisations.”

On the flipside, some online attackers are from local CSOs and non-government organisations (NGO) advocating human rights and women’s rights issues.

In fact, the reporters/journalists play a key role to raise the public’s awareness on the GBV issues via their news and information. In the campaign, 16 journalists (8 men and 8 women) shares their training needs on the issue. Some of them, especially from ethnic/ remote area, want to write in-depth/ investigative reports on GBV cases. But, they cannot verify which cases are GBV-related crimes.

“It is essential for professional journalists to join wider and inclusive discussion on GBV themes and issues, and knowledge sharing sessions with technical know-how on reporting these issues”, says Tin Zar Aung, a media trainer and executive committee member of Myanmar Women Journalists Society (MWJS). 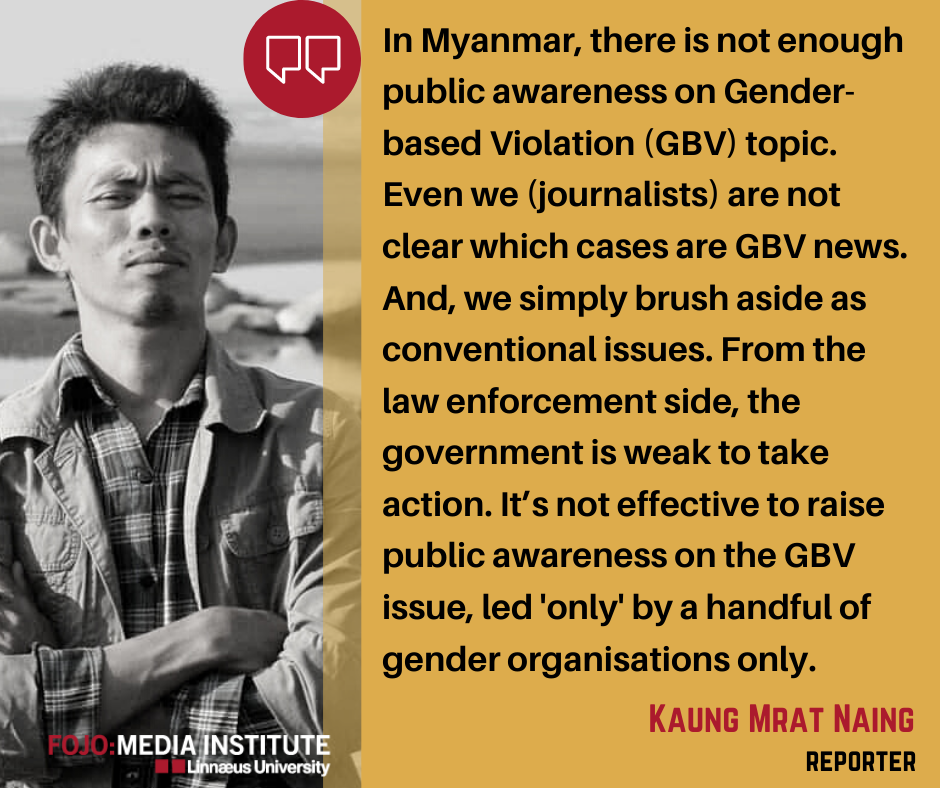 Mostly, victims do not know how they can make complaints as they don’t have legal knowledge. Here, Pwint Phyu Phyu Lwin, a Higher Grade Pleader, picks some existing laws in the country that can assist for Gender-based Violence and Harassment (GBVH) cases.

Moreover, a draft bill of ”Protection and Prevention of Violence Against Women Law” (PoVAW) has been drawn currently. When this PoVAW becomes full to its life, gender-based violence against women will be efficiently tackled.

However, the first step is to be familiar with the laws and the legal procedure.

Last week a military coup overthrew the government in Myanmar, imprisoning the elected leaders and restricting access to independent information to the public and citizens. Fojo talked to a media professional living in Yangon (the largest city in Myanmar), about how the situation is unfolding.