How to create a safe space for women journalists in Zimbabwe

This article is written as part of series of articles highlighting gender-based violence and discrimination in the media under the campaign 16 Days of Activitism against Gender-Based Violence.

Abigail Gamanya the National Director of Gender Media Connect Zimbabwe cuts a forlorn figure in a coffee shop on the eve of the 16 Days of Activism against Gender-Based Violence. According to her, Zimbabwe media has not made the giant strides expected for female journalists.

She sighs before she speaks: “It is hard to be a female journalist in Zimbabwe and everywhere else in the world. To many this might sound like an overplayed song – a cliché, but we need to reflect on the landmines set in the media and in the society that make this job so hard for us.”

According to Gamanya the 16 Days of Activism speaks to the work that her organisation, with the support from Fojo-IMS, has been doing around advocating for gendered inequalities.

“Despite the promising strides made in the media and freedom of expression landscape over the past four years, Zimbabwe is still struggling with gendered inequalities and inequities, particularly within the media sector. There is an urgent need for gender-sensitive policy frameworks to facilitate women’s increased participation in and access to the media,” she said.

Gamanya stresses the importance of the nation to take time to reflect on how to create a safe space for journalism for women: “The Zimbabwe media industry is grappling with issues of accurate, fair and balanced reporting, general skills development, gender mainstreaming, sexual harassment in the industry, corruption and nepotism. And women have suffered the most. These 16 Days are about reminding everyone that women’s voices matter.”

The United Nations is marking the 16 Days of Activism against Gender-Based Violence from 25 November to 10 December 2021, under the global theme set by the UN Secretary-General’s UNiTE campaign: “Orange the World: End Violence against Women Now!”

Nearly 1 in 3 women have been abused in their lifetime. In times of crises, the numbers rise, as seen during the COVID-19 pandemic and recent humanitarian crises, conflicts, and climate disasters.

A new report from UN Women, based on data from 13 countries since the pandemic started, shows that 2 in 3 women reported that they or a woman they know experienced some form of violence

Most violence against women is perpetrated by current or former husbands or intimate partners. More than 640 million women aged 15 and older have been subjected to intimate partner violence. 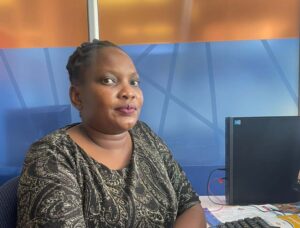 It is a point Harare based Zimbabwe Television Network (ZTN) senior reporter, Mirirai Msingo concurs with: “Someone once said journalism is for the brave, but for women it is for the daring. At a time like this we must remember that female journalists are fighting patriarchy from the bedroom to the newsroom. You must remember that we are mothers-juggling so many roles and satisfying men on all fronts. Who is looking after us?”

In 2019 there was an outcry when Faith Zaba was appointed the editor of The Zimbabwe Independent, a leading privately owned newspaper based in the capital. She was the first female to be appointed for this post at the newspaper. She suffered online violence and was vilified for having been favoured to get the job.

In a statement, Gender Media Connect said: “So it’s 2019 and some Zimbabwean journalists — mostly men — are unwilling to tolerate female media managers rising to take up the mantle at our major media houses.”

Notably, South African National Editors’ Forum in a statement defending a South African journalist SABC Foreign Editor Sophie Mokoena, who was insulted by government official on social media, said:  “in 2020 we expressed our serious concern about the vicious online and social media trolling of women journalists and media workers in Zimbabwe. At the time, we cautioned against the tweets by George Charamba, the Press Secretary in the Office of the President of Zimbabwe and Permanent Secretary in the Ministry of Information of Zimbabwe, who was behind the attacks on Mokoena and a colleague, Peter Ndoro. We cautioned that Charamba’s actions – assisted by Nick Mangwana, Secretary of Information in Zimbabwe – were creating significant professional harm. We asked them to stop. But it has not all been gloom for female journalists as some media houses, like the Fojo-IMS supported NewsHawk, have been taking steps to address the concerned issues.

Recently they established the Centre for Public Interest Journalism to strengthen the capacity of female journalists on investigative journalism in Zimbabwe.

Dumisani Muleya, NewsHawk managing editor said the 16 Days of activism was instructive in that it reflects on the changes the media should undertake from protecting the female journalists to providing balance.

“Addressing gender imbalances in the media can spur positive reform in other spheres of society in relation to patriarchy and unequal power relations between men and women, given that media can be a major change agent” Muleya said. “We saw the need to address structural issues and flaws in the media sector linked to similar problems across society, as well as identified gaps in training programmes, gender relations and participation in critical media areas between male and female journalists.”

The centre started off with 12 female journalists and has been hugely successful with some of the beneficiaries winning awards and breaking stories with a huge impact on the current affairs arena of the country.

FOJO-IMS continues to push for combating violence and discrimination with quality journalism, challenges repressive laws and keeps media workers of all genders safe, so that they can do their jobs. Through alliances and innovation, they have helped free, independent media contribute to positive change and better societies.