Greatness or disaster? Ethiopian journalism can become either!

Hem/Nyheter/Greatness or disaster? Ethiopian journalism can become either!

The upcoming months and years will tell us which path the Ethiopian media choose to take.

Do you believe that truth can be found around a Bar desk?

The people you tend to speak with in such places are either drunk, disillusioned – or both.

But, the two gentlemen of the press I was talking with, was neither drunk nor disillusioned.

The scene was the bar in Addis Abebas Hotel Intercontinental on the first night after the opening day of the two day conference “Promoting Journalism And Democracy In Practice – Media Reform In A Time Of Change”.

“Well. This all depends on whether the political system and the media will collaborate in an orderly way, and stop pointing fingers at each other for former transgressions. It will take forgiveness. I do not know if we have it in us, here in Ethiopia”, one of the men, an Ethiopian media executive, told me. On the other side, stood the owner of radio stations elsewhere on the African continent. His bottomline was even more frank:

“I am sure Ethiopia will get to a good place. I am just not sure, if they can get there without killing each other first. Where I come from, we had to go through unrest and loss of human life, before we could settle on creating peace. Sometimes that is what is needed”, he said before gulping down the last sips of his soft drink. I thanked them for their honesty, – and stood there for a while reflecting on the high degree of honesty, I thought, had been very present at the first conference day.

Earlier that morning, it was difficult to event get a seat in the big plenary room in the UNECA HQ’ers. Fortunately, it looked like an overwhelming majority of Ethiopians and other colleagues from across the African continent had travelled to be there.

Which proved to be correct: In a smaller breakout session later that day, I counted attendees from Ethiopia, Uganda, Kenya, Rwanda, Indonesia and Sweden, which I thought was a symbol of the reach and impact the conference held. 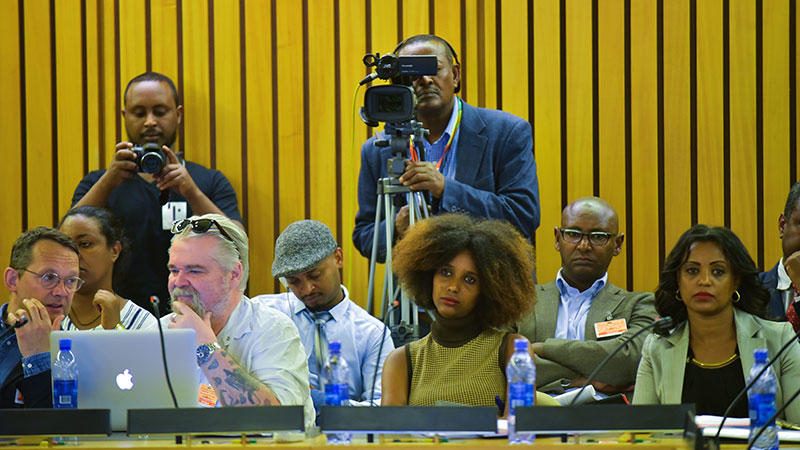 The plenary sessions were filled with engaged debates.

Not only from the panelists sitting in the front of the room, sometimes even much more from attendees in the plenary room itself. I could not help but be impressed by the knowledge represented by panelists both days, – and the willingness to dive into difficult discussions about how to secure independent professional newsrooms, what laws need to be mended and added, how to fight hate speech and fake news. And not least: How can media become financially successful while producing quality journalism?

My thoughts went back to early December 2018, where Marika Griehsel, Mike Robertson Nubia Media and myself had conducted media training workshops for Ethiopian journalists. Back then, it was quickly clear to us all, that instead of pouring good ideas, tips and tricks from our respective countries, – it was much wiser to ask the attendees themselves, of how they saw the situation, the standards of their journalism professions, the challenges and the potential.

I remember asking the attendees at the December workshops, of what it would take and what they would need to secure a high professional journalistic standard in their country. It did not take many seconds before ideas and wishes flowed through the air. We wrote everything down, and filled three big white posters with everything that was said, then.

Now, in April, back in Ethiopia, my eyes ran down the two page conference program, and I smiled. I recognized all topics from the white posters, we had written in December, just four months earlier. The opening day of the conference was kicked off with the theme “What is required to have free media?”, where the panel held speakers sharing their struggles, wins and best advice to the room, where we sat listening, intently.

What could Mohammed Ademo, an exiled journalist who had fled Ethiopia years earlier to the USA, teach us about free media? Well, lots.

Through what seemed to be an honest account of learnings from managing the indie and popular news media OPride from outside his home-country, Ademo called for forgiveness and a focus on collaboration between both media and government, while respecting the independence media should enjoy. Ademo himself talked about the challenge with there being “no middle-ground” in Ethiopian media. “You either have the media who is infiltrated and controlled by power-holders in government  – against the other side, which is dominated by bloggers who express radical fringe views and opinion pieces. Pieces which can not be classified as journalism, because they do not uphold values like being fact-based and balanced.”

A lawyer took the word during the conference, while media reform was being discussed. The debate was getting heated. To an outsider (me) it seemed clear that this was one of the problems for a healthy future of Ethiopian journalism: Blame-gaming showed it’s ugly head. Government people said the journalists behave unethically, the journalists claimed that the politicians and government officials do not make themselves available for journalists, who seek to interview them or get comments on an ongoing situation. Both, totally unacceptable scenarios. I could not help but thinking, that it is not difficult to see how a relationship can turn very sour, if you as a reporter know, that you never will be able to ask questions and get answers from politicians responsible. When it’s never possible to hold politicians accountable through critical interviewing, – then it’s easy to see how you might resort to writing scathing opinion pieces instead. Which slowly and surely brings you far away from fundamental principles of classical journalism, where less opinion and more facts are the primary quality parameters.

Multiple times during sessions, the discussion was so engaged, (some would say heated), that the moderators needed to step in, calm people down and keep track of time. Many might say, that this was problematic. That there wasn’t enough time.

I would say, that there would never be enough time for the discussions to ebb out. To me it was a sign, that these issues have needed to be debated openly for quite some time, where it have not been permitted.

Now, the floodgates are open – and there is a build up which needs to be decompressed. This conference was a needed first step in this direction, and with written material – a booklet – filled with inspiration, documentation, learning and concrete tools to tackle the challenges ahead.

What concerns me, is whether or not my colleagues in Ethiopia will choose take the needed steps: Take action on media reform, self-regulation, diversity and financial stability. And, make sure they collaborate with skilled colleagues from outside of Ethiopia, and with relevant entities in the political and governmental bureaucracy.

It’s a team effort – and not just on the side of the journalism profession. It’s an Ethiopian team effort, where the public also needs to see their journalists act responsibly and professionally.

Less finger-pointing at others – and more focus on “being the change you want to see in the world”, is an intelligent path forward. I sincerely hope, my Ethiopian colleagues will choose such a path. As the closing speaker, Henry Maina the Regional Director of ARTICLE 19, Eastern Africa said: “Remember you have friends across the African continent, yes even in Europe, who are here to help you. Who are eager to help you. Remember, you are not alone!”

Bangla Vision has investigated an unbearable situation the fishermen and their families in Bangladesh face on a daily basis. It is an investigation that has inspired other reporters to do similar stories.

Greetings from Fojo Head of Policy and International Development Lars Tallert, who is in Ethiopia celebrating World Press Freedom Day with Nubia Media journalist Hadra Ahmed and many others.

As part of the Ethiopia Media Reform project, funded by the Swedish Embassy in Ethiopia, Fojo has produced two new publications in support of the current media reform process in Ethiopia.