As part of the Ethiopia Media Reform project, funded by the Swedish Embassy in Ethiopia, Fojo has produced two new publications in support of the current media reform process in Ethiopia: 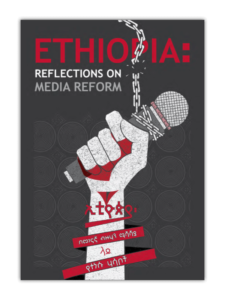 The publication aims to provide critical reflection and useful tips and tools for Ethiopian journalists and anyone who has an interest in media reform during times of change and focus on broad media reform themes such as press freedom, self-regulation, media business models, media councils, gender representation in the media, and the need for tools and resilience in a digitalized world. While most of the contributors to this booklet are Ethiopian, there are also journalists and experts from other African countries like Zimbabwe, Kenya, South Africa and Sweden. The book was commissioned by Fojo project manager, Marika Griehsel and edited by Heather Robertson (Change Routes), translated from English to Amharic by Biniam Getaneh and designed by Izzat Amanuel.

Photographer Michael Tewelde has taken the photos to both publications, most of them during the conference ”Promoting journalism and democracy in Practices – Media reform in a time of change”, 9–10 April at UNECA, Addis Ababa, arranged by Fojo Media Institute, The Swedish Embassy in Ethiopia and Nubia Media and Communications.

”Media reform is not only about reforming the laws. It is about reforming the heart of the culture of journalism as well as the relation between media, government, civil society and international stakeholders. It is about producing journalism that is based on truth-seeking professionalism”, says Lars Tallert, Head of Policy and International Development at Fojo Media Institut. 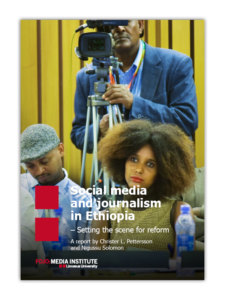 Social media and Journalism in Ethiopia, setting the scene for reform

The report, with a journalism and freedom of speech perspective should be seen as an introduction to how social media influences sustainable, independent news publishing, freedom of speech and growth of democracy in Ethiopia.

This against the backdrop of an intensified international debate and actions taken across the world to come to terms with social media platforms including the use of them by undisclosed political forces.

“Social media is the dark horse.
Social media has, in a few years,
turned the political landscape in
Ethiopia on its head not only as a
means of mobilising people, but also
as a means of spreading rumours,
hate speech and disinformation.”
Quote from the report

Christer L. Pettersson has prepared this report for Fojo Media Institute, Sweden with the assistance of Nigussu Solomon, in collaboration with Nubia Media and Communications, Ethiopia.

Bangla Vision has investigated an unbearable situation the fishermen and their families in Bangladesh face on a daily basis. It is an investigation that has inspired other reporters to do similar stories.

Greetings from Fojo Head of Policy and International Development Lars Tallert, who is in Ethiopia celebrating World Press Freedom Day with Nubia Media journalist Hadra Ahmed and many others.

Greatness or disaster? Ethiopian journalism can become either!

The upcoming months and years will tell us which path the Ethiopian media choose to take.
Right now, we wait.