Unite to survive: How Georgian media work with advertisers in a small market

Home/News/Unite to survive: How Georgian media work with advertisers in a small market

Media outlets all around the world are currently being forced to look for new creative ways to secure an income. One place to look for inspiration is Georgia. Since the local market for advertising has always been very limited, most local media are heavily dependent on donor funding. But a bunch of small regional publishers came up with an innovative way to find new customers – through cooperation.

In Eastern Europe, media outlets often struggle to make ends meet – just like in many other parts of the world. What makes this task even more challenging is underdeveloped local markets, not the least in terms of advertising. In practice, this means that only a few publications succeed in attracting enough advertisers to secure profit.

Other publishers may be forced to seek financing from other sources than the commercial ones. In the worst-case scenario, media outlets have to rely on oligarchs, high-ranking politicians or local-level moguls for their financing. This scenario, most often, comes with a price: power players can and do ask for editorial loyalty in return. Those striving for independence from politicians can turn to international donors, and often end up having this type of funding as their biggest source of income. While a seemingly easy and better choice, relying exclusively on donors has its own flip sides. International financing often comes with an agenda attached to it, which can also be criticised as a risk to editorial independence. Moreover, having only one real source of income means that media are extremely vulnerable: if donors decide to withdraw for some reason, these outlets will have to cease their operations overnight.

Relying on donors is quite typical for independent media in Georgia, a country of little more than 3,7 million people and ranking 102 on the world’s GDP per capita rating [1]. The local advertising market is small and shrinking [2], with the biggest slice of the pie going to the TV-broadcasters. Not much is left for the print publications that are declining pretty much the same as around the world, and even less – for the online media. According to the local experts, most businesses do not have enough digital competence to start investing in online advertising [3]. To make things worse, a country’s economy and media market have suffered a big hit since tourism, one of Georgia’s main industries, was decimated due to the pandemic. And then there is another difficulty in this game: being a regional media, with an advertising market limited to the small local enterprises. 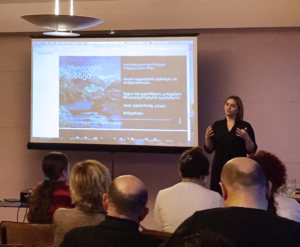 “A major problem for local media in Georgia is extremely low advertising revenue. The majority of large businesses are established in the capital, Tbilisi, and therefore, it is hard for regional media to communicate with them. Especially since local media outlets often do not even have relevant sales teams. – says Ia Bobokhidze, chairwoman of the Georgian Regional Media Association (GRMA). – So, the vast majority of regional media continues to exist by the virtue of financial support from international organisations”.

It was local media themselves who suggested the idea of a united sales office. With Fojo’s support, GRMA set up a sales team that now works for the 26 media in their network. This team bundles up the local media inventory – online, print, and TV – into advertising packages that allow media-buyers to reach a wide audience in different regions of Georgia all at once. Being a part of this initiative means that local media can now have national-level advertisers that might otherwise not have considered regional outlets.

“Recently, we have new advertisers through the joint sales office and our sales have increased. – says Maia Kalabegashvili, the editor of Speqtri.ge. – We work in the popular touristic region of Kakheti, where one must compete with many other media. Through exchange and consultations with the experts, we were able to find a way that makes our media competitive”.

The centralised sales office also takes care of negotiations with customers – and having a whole range of media in their offer serves as a good leverage. “It is much more difficult to sign an individual agreement for one media outlet separately, compared to offering an all-inclusive advertising package. – Says Ia Bobokhidze. – Clients prefer a single window principle, where they sign an agreement with one legal entity and receive access to a range of local media. This includes advertising via a number of selected media outlets of the target region, monitoring, and reporting”.

Fojo supports the GRMA’s joint sales office in the framework of the regional programme for Eastern, Central Europe, and Russia (ECER). Through this initiative, the sales team have received training from consultants experienced in negotiation techniques, budgeting, special advertising projects and a new website. Since 2018, when this work started, sales increased significantly. In 2020, Fojo and GRMA organised a meeting with Georgian advertisers: many businesses were interested to run their campaigns on the regional level but were not aware of the possibility to purchase advertising inventory through the centralised service. This meeting helped to establish new professional contacts and even make new sales.

In the future, Fojo plans to continue holding meetings for GRMA and representatives of marketing departments for national advertisers and international companies. “Advertising through the regional media in Georgia can help businesses to build trust among the local audiences. – says Fojo’s International Programme Manager Veronika Menjoun. – At the same time, we hope that European companies can also appreciate such cooperation in terms their corporate social responsibility. Through supporting independent media they can contribute to the democratic development of Georgia”.