Myanmar journalists say they have not had much training on gender issues related to news reporting but know that having a gender perspective is an important journalistic skill – and would find it useful to get more, and deeper, training on using it to strengthen storytelling. These were among the key findings of a survey by the Myanmar Journalism Institute (MJI) that collected insights and information about the understanding and awareness, as well as experience, of reporters and editors in Myanmar in using gender as a news reporting tool.

The findings of the survey initiative, which was carried out with the support of Fojo Media Institute’s Southeast Asia Media Training Network project, are to be used as journalistic practice-based inputs in a gender-for-storytelling course that MJI would like to develop and offer in Myanmar. The findings would also help the institute weave in gender into its wider training curriculum. 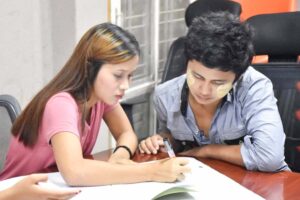 Above image: Journalism students of full time diploma courses in preparation for their discussion plan at Myanmar Journalism Institute (MJI).

There were 49 respondents in the survey, which involved the use of two online questionnaires, one for reporters and one for editors, ranging from section to chief editors. Among the 49 respondents, approximately 75% were men and 25% were women, mostly from online media outlets in Myanmar, the majority from Yangon but media houses in Mon, Rakhine, Shan state and Thanintharyi, Mandalay and Pathein divisions were also represented. Most of the media houses produce news in Burmese, while some are in the languages of other ethnic communities. Over 80% of the respondents said they had never received any training on gender aspects in news reporting. The survey, among other things, showed that editors and reporters found it challenging to use gender-inclusive and gender-sensitive language in news stories and to identify sources who were women or of other gender, on topics that usually have male interviewees. It also showed a desire to produce more in-depth stories that go beyond mentioning “women” or ”quoting women”.

-Even though Myanmar journalists understand that they need to bring different sources into their stories, there is great need to enhance their knowledge of gender, Myanmar Journalism Institute Executive Director Kyaw Min Swe said.

-What most still understand gender to be is just male and female and to promote the participation of women voices in the community through the media platform. Actually, the definition of gender is so much wider than that, he explained.

For MJI, he said, the results of the gender survey are useful for shaping the curriculum of not just its full-time diploma course, but for designing a specialised subject for working journalists.
-One of the tasks of the media, after all, is to raise the voice of the voiceless, which means to highlight sources that may not be popular or to give ordinary people from different sectors a voice.