By the end of October, total confirmed cases have exceeded over 50,000 and 1199 deaths nationwide taking the fourth place of ASEAN Covid-19 index within just two months.

When authorities imposed stay-at-home order on overcrowded Yangon –an attempt to curb virus spread— like many other businesses, publications had to pick head or tail, halt the entire operation or continue to circulate as budget friendly business.

On the other hand, several thousands of working Myanmar journalists are told to remain at home and shifted from typical journalistic work into telecommuting. In order to be able to freely do their work, media organizations lodged a letter to de facto leader Daw Aung San Suu Kyi and several government departments demanding to exclude journalists from stay-home program through Myanmar Press Council (MPC) channel. None of them responded until publishing this article.

Meanwhile, criticisms mounted over government social distancing order as countless mass election rallies are taking place in many cities for November elections. In some places, election violence erupted between military affiliate the Union Solidarity and Development Party (USDP) and the National League for Democracy (NLD) party supporters killing one in Sagaing region in October. 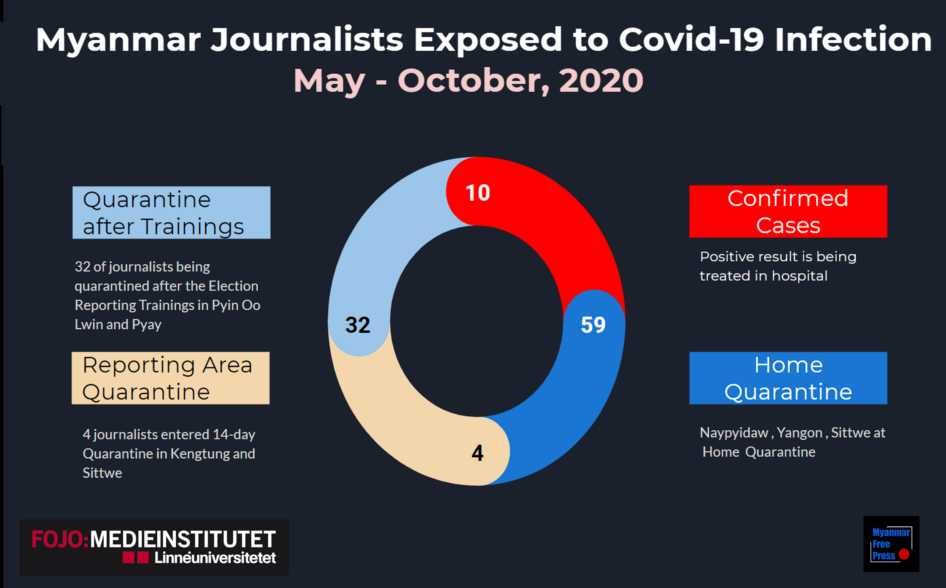 Myanmar journalists exposed to Covid-19 during the second wave of pandemic.

In fact, just a month ahead of second wave, some private media houses were in chaotic situation as they have been suffering financial dilemma since early virus detection was below a thousand.

According to Myanmar Free Press (MFP)’s April survey, 298 journalists from state and region said that they were challenged securing their jobs. The following month, when MFP updated the latest job insecurity of in-house reporters has doubled up (600 reporters) across the country.

Out of 600, 244 are from commercial hub Yangon which is made of 40 percent of the total while other 54 accounted for Shan State and the rest from central Myanmar and delta regions.

A half of the respondents (300 journalists) were devastated by dismissal, salary cut or lay-off. Among those 217 journalists – 36 percent of the total respondent—have ousted from jobs. Whereas working journalists are being suggested remotely working from home, there are inevitable issues, for instance, taking photograph outside or outdoor shootings.

Unfortunately, in late October, 10 journalists from Naypyidaw, Yangon, and Rakhine, have tested for Covid-19. Plus, 90 journalists were admitted to facility quarantine centers as they had close contact history or secondary contact with confirmed cases in different states and regions.

Editor Nay Min Kha of Yangon based News Watch was one of the virus infected journalists in September and his entire family -11 members – tested for Covid-19.  He recalls his ordeals after recovery from respiratory illness to FOJO on 31 October.

“I was experienced terrible discriminations in my community because in early stage people were in panic as they have limited knowledge about this virus.”

Compared to Indonesia and neighboring Bangladesh, virus infected reporter population in Myanmar is significantly low. Bangladesh reported 10 journalists died with Covid-19 symptoms and detected 697 cases, among journalists and media employees nationwide as of August, while Indonesia reported 242 journalists with virus as of September.

According to government’s 2015 report, Myanmar has about 2,000 accredited journalists across the country but some media experts believe actual number could be higher than that.

Due to lack of archive, the grand working journalist population remains unknown until now. In order to oversee data crisis, Press Council says it is documenting but still not in sight as news outlets have very little interest in it. 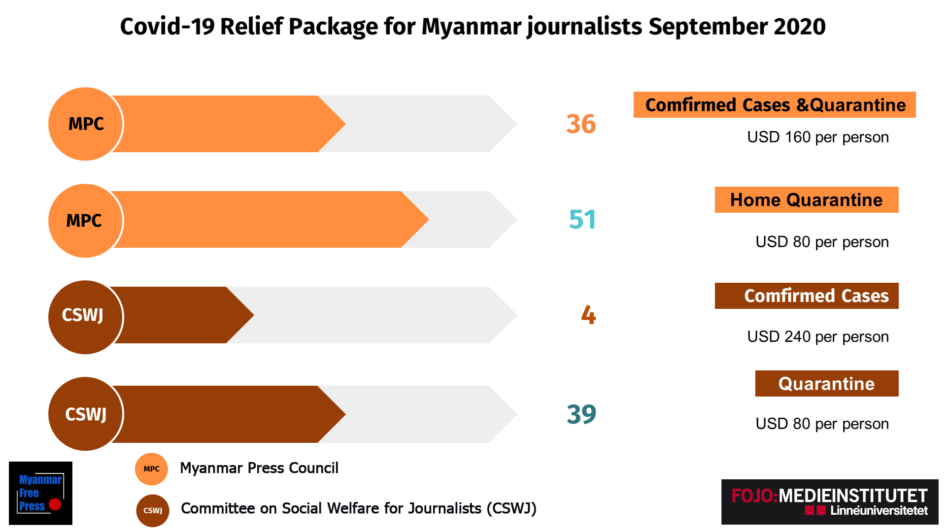 Covid-19 Relief Package for Myanmar Journalists from Press Council and Comittee on Social Welfare of Journalists.

A straw for infected person

As the pandemic period stretches longer, the concerns of survival and sustaining the profession have been boiled up among journalists. In response to those concerns in certain extent, Myanmar Press Council (MPC) initiated a one-time Covid-relief package – cash payment – for individual journalists.

Until the end of September, MPC distributed Covid-19 financial aid to 87 individuals. But due to financial dilemma, the cash assistance program is dragging itself.

Another non-profit group, Committee on Social Welfare for Journalists-CSWJ also contributed 3 lakhs of MMK (approximately 240 USD) for virus infected journalists and 1 lakh of MMK for quarantined group. The group was able to support 53 reporters in September.

“We are incredibly happy when unexpectedly gained financial assistance. I can even say that cash-payment saved two of my family members who have regular medications.”

Editor of Myaelatt Athan outlet from Bagon Division said that cash payment was deliriously helpful for him.

“As I was admitted to quarantine center for 18 days and it totally bothered my work. It also harms mental strength. Covid-relief from MPC and CWSJ are very helpful to me as i was unemployed during these days” 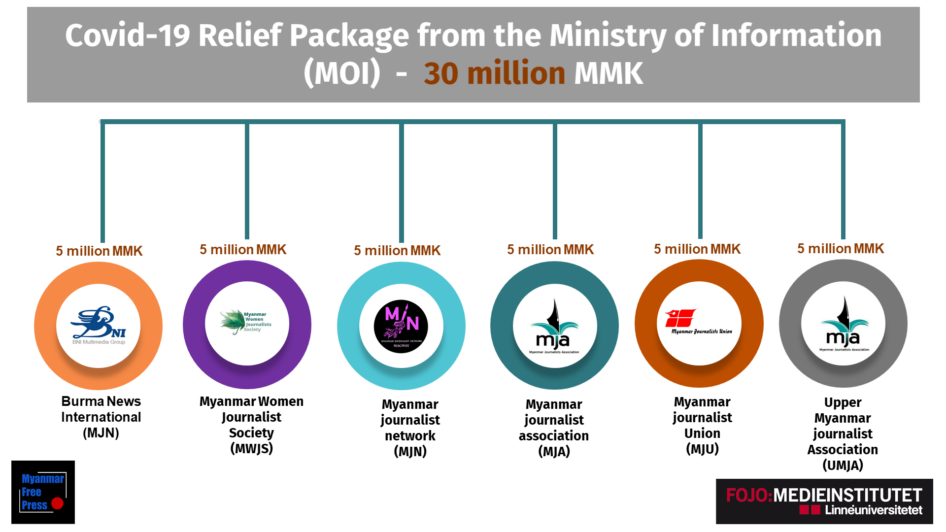 As the plight of journalists has come to health authorities’ attention, Ministry of Information held a virtual meeting with six non-profit local media networks in October, attendees agreed to receive 30 million MMK financial aids from the ministry.

When life is in limbo, many unemployed journalists earned for a living by selling foods in the streets, online salesmen or women, or became deliverymen for businesses despite high risk outside. It is unclear whether the rest of the jobless reporters received Covid-relief distributed by journalist networks.

Napyidaw correspondent Ma Mari Khine of Kumudra publication remarked that cash assistance is pragmatic approach even its size could not fully address hectic life of a journalist.

“When we are encountered bad things, employers deduct (reporters) salaries. So the cash assistance (Covid-relief), somewhat oversees that.”

When financial burden brings journalists down, some of them completely shift to new environment from media field. Salai Kaung Myat Minn said that rather than randomly solving the problems, institutionalized organizations could efficiently solve in the long-term.

In current state, virus will not disappear anytime soon globally. And, it’s impossible for journalists to avoid going outside or working from home all the time. Therefore, practicing the safety guidelines of health practitioners, properly wearing protective gears are the golden rules whenever going outside to do their reporting jobs. Upgrading the way of reporting to catch up with a new normal, in safe manner is the only hope and solution to sustain their career.

*PAING SOE OO, pen-name “J Paing”, is the Chief Editor of “Myanmar Press Photo Agency”, and also the founder and researcher of “Myanmar Free Press”, facebook-based news platform. In 2019, he was a fellow of advanced International Training Programmes (ITP) of Swedish International Development Cooperation Agency (SIDA). As a professional photojournalist, he spent over 6 years with the Iraawaddy News Group (from 2012-2018), before he established his agency.

This 60-page book invites us to be curious about the words around gender in the media – and offers real-world tips in newspeak, drawing from the context of Southeast Asia.