By Uyen Diep with Ha Dang*

Hem/Nyheter/COVID-19: For Vietnam, Information Is A Public-Health Weapon

This was in March, when COVID-19 cases were spiking fast in Britain. From there, she took to heart the slogans, spread widely across Vietnam, that ‘staying home is patriotic’ and  ‘staying home is fun’.

Khanh, a 27-year-old masteral student at Brunel University London, got these messages through the account of the Ministry of Health (MOH)  on the homegrown Vietnamese application Zalo, as well as the video application TikTok.

“It affected my decision to not leave Britain since I understood how the risk I would face while traveling,” Khanh recalled in an interview. “Moreover, as I was not sure whether I was infected or not, flying back to Vietnam could make me a burden (on others) and a transmission source.”

As of 18 June, Vietnam has a cumulative total of 335 COVID-19 cases, of which 10 are active, and has reported no deaths. Limits on public mobility were lifted on 23 April, and schools reopened on 4 May. The Southeast Asian country has been described as a success in managing the pandemic, doing much better than its neighbours in the region.

That Vietnamese – in the country or outside it – were closely following Zalo or TikTok to stay updated on the COVID-19 situation was far from just a coincidence.

The Vietnamese government’s public communication campaign, which plays a key role in its management of the pandemic, has been anchored on flooding audiences with the health-focused reminders – and bringing their messages into the online channels and platforms popularly used in the country.

After all, 70% of 97 Vietnam’s million people are online users and 67% are active social media users, says the ‘Digital 2020 Reports’ by We Are Social and Hootsuite. Moreover, some 70 percent of social media users are 13-34 years old.

The Ministry of Health’s official Zalo account had actually been sending messages about COVID-19 since 28 January, six days after Vietnam confirmed its first case.

The messaging and calling application Zalo is the third most-used social media platform in the country, used by 74% of its internet users. Vietnam also used it to roll out an e-government model in 40 provinces.

The social online campaign of the Vietnamese government, especially on TikTok, took off on this hashtag: #Onhavanvui (#StayHomeIsFun).

It put a positive spin on the idea of staying home, in order to get people to keep themselves and others safe during COVID-19. The #Onhavanvui campaign on TikTok was a collaboration between the Ministry of Health, the political group Committee of the Vietnam Fatherland Front, the Vietnam Digital Media Association and the United Nations Children’s Fund.

As of 8 June, the hashtag #Onhavanvui from TikTok MOH has gotten more than 8 billion views on TikTok. The first video from the account of MOH was posted on 12 March.

Even before the pandemic, TikTok was already the 6th most-used social platform in the country, used by 39% of internet users, according to data in the ‘Digital 2020 Reports’. 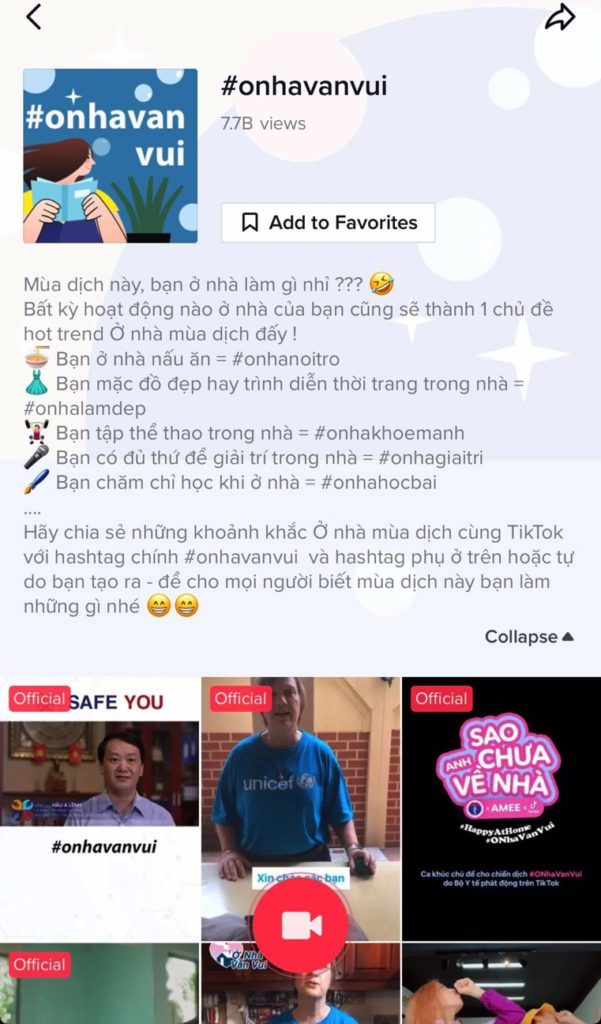 Screenshot of the TikTok campaign in Vietnam, asking people to stay home.

Among the most viewed and shared #Onhavanvui videos were those by Thao Nhu, a 23-year-old food and product photographer, who churned these out daily during the more than three weeks from time the social distancing order was issued on 1 April.

She spent one to two hours per day making 15- to 60-second videos on TikTok with the hashtag #Onhavanvui, or #Onhavandep (‘still beautiful while at home’). These featured clips that showed her all dressed up although just staying at home, dancing at home, or ‘arguing’ with her housemates over who would do the housework.

“This is the first time I have seen MOH choose an accessible and millennial-friendly way to communicate and spread their message,” said Nhu.

She said that she was impressed by the pop tunes that young artists recorded using lyrics about COVID-19, such as ‘Why Have You Not Come Home Yet?’ by the young female singer AMEE. “A trendy, catchy, easy-to-digest and impactful song!” she said of this theme song used in the TikTok videos of the #Onhavanvui campaign.

The wide reach of the government’s public-health messages among young Vietnamese was also evident from an informal survey that this writer did in May among Facebook users in Ho Chi Minh City, Vietnam.

All except one of the 120 respondents said they knew at least one song/campaign/slogan across multiple social platforms. Among the songs they listed are ‘Ghen Co Vy’ (the ‘wash hands’ song) and its English version, and ‘Why Have You Not Come Home Yet?’. The hashtags they know are the campaigns #Onhavanvui and #Thankyouhero mainly on TikTok. They cited the slogan ‘staying home is patriotic’. (One respondent, however, said he knew none of these campaigns and slogans.)

Given a multiple-choice list of news sources, the respondents selected how they got COVID-19 updates – A total of 84.2% said they access online newspapers’ websites, 61.7% watch television, 51.7% access the Zalo accounts of MOH and various newspapers, and 44.2% check a Facebook page called Thong tin Chinh phu (Government Information). Forty-eight out of 120 respondents (40%) said they registered to receive notifications from the health ministry’s Zalo account, and 30 respondents said they did the same after becoming followers of the Thong tin Chinh phu (TTCP) Facebook page.

While the TTCP Facebook page has been around since October 2015, its followers have grown massively over the past year. From 298,376 in May 2019, it climbed to 939,335 in May this year, according to data of the SociaLift application for influencers that is part of YouNet Media, considered the leading social-listening platform in Vietnam.

Many followers of the TTCP Facebook page signed up from January, soon after Vietnam’s first COVID-19 case. At one point during the January to May period, the page’s new followers reached 346,210 in just a month.

For Nguyen Quynh Nhu, a senior assistant brand manager in Ho Chi Minh City, the TTCP page has what she calls “new news”, which she defines as being reliable, visual and social-media friendly.

“My Facebook newsfeed is flooded with shares from the (TTCP) page,” said Nhu. Her friends and her parents, who are in forties and fifties, also use the TTCP Facebook page. “It is our habit to check the page whenever we doubt any news. Besides providing facts, TTCP plays a vital role in addressing ‘fake news’.”

Figures from SociaLift show that the TTCP Facebook page had 856 posts from January to May 2020, and lots of interaction with its users and followers. The number of these interactions jumped nearly three times from January to February. From March to April, the number of shares and comments rose by nearly 73 percent from 1.26 million to 2.19 million.

This upward curve follows the COVID-19 trend in Vietnam, which saw the pandemic’s first wave from late January onward and the second in early March, followed by the government’s social distancing order in April.

‘THIS HAS NEVER HAPPENED BEFORE’

“When people are informed in a transparent way, ‘fake news’ may not be able to last long, if there is any,” said Ngo Phuong Thao,  an executive at a market research company who says she gets information about COVID-19 from watching television news with her family.

She explained: “Contact tracing is one of the most efficient tools to stop COVID-19 spread, and Vietnam does it well. The government provides epidemiological history of patients clearly and widely in the form of urgent notices. When a case is confirmed, the movement (of that person) is marked down, and anyone who had links to the case would contact the MOH for testing.”

Thao remembers receiving a text message on 22 March from Prime Minister Nguyen Xuan Phuc, urging everyone to follow safety precautions. All Vietnamese were sent this same message as the government prepared to issue social distancing instructions, under which the Prime Minister asked each person to be a “soldier in the battlefield against the pandemic”.

The health ministry had actually been sending text messages, since 2 February, to announce important notices or remind people about safety measures they must take.

From April 1 onwards, when making a mobile phone call to someone, one would first hear this voice message: “The Ministry of Health recommends that people do not leave their homes when it is not absolutely necessary.” After the social distancing order was relaxed later in April, the message became a reminder to help set up a ‘new normal’, but to maintain precautions.

“This has never happened before,” Thao said of this kind of information campaign. 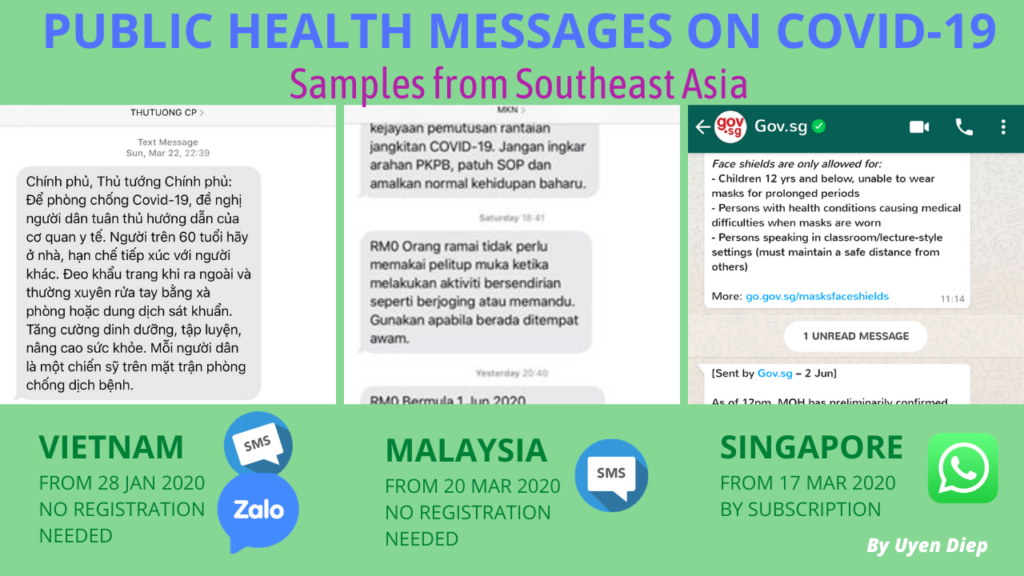 This all-out campaign on COVID-19 was such that “even people who do not read newspapers often will be informed,” Lan Chu, a 36-year-old editor, believes.

The COVID-19 efforts reflect how the times have changed, compared to those of epidemics such as the Severe Acute Respiratory Syndrome (SARS) in 2003 and the H5N1 flu in late 2003, when the major communication channels were newspapers and television. In contrast, Vietnamese today have so many more ways to find information.

“In the past, it was not very often that news was updated. There were less government press conferences and there was a lack of daily data analysis,” 53-year-old secondary school teacher Trang Pham recalled. Mass communication during COVID-19 has been very detailed, and updated daily like hot news, she adds.

Hai Nguyen, a 59-year-old engineer, added: “They (government officials) clearly notified (us about) new cases of the novel coronavirus and recovery cases two times a day, at 6 AM and 6 PM.”

Truyen Tran, editor of ‘Muc Tim’ online newspaper, says that getting COVID-19 updates mostly through the TTCP Facebook page and Zalo allows him to see different perspectives.  Unlike during the past, he said: “Amidst COVID-19, I can choose to learn about the situation via social media or government (social) applications, which are faster and can be accessed by a wide range of audiences.”

There are, for sure, other differences between SARS and COVID-19. The spread of SARS was much more limited, with 63 cases and five deaths in Vietnam over the six-week period from 15 March to 28 April 2003, when the World Health Organization declared the country SARS-free. In addition, people did not travel so frequently as they do today.

But social platforms have radically changed the information environment in the almost two decades since SARS, reflects Huynh Van Thong, former dean of journalism and communication at the University of Social Sciences and Humanities, Vietnam National University, in Ho Chi Minh City.

Today, he says, the Vietnamese government itself has harnessed online spaces and multiple social platforms in its drive to slow the spread of COVID-19. He points out it has even launched applications that individuals can use to make health declarations.

“The government provides and analyzes figures systematically, and cooperates with news agencies, disseminating information widely,” Prof. Huynh Van Thong said.” They (officials) have even reached (the point of distributing information through) (mobile and smart) phones.”

*Uyen Diep is media correspondent for ‘Thanh Nien’ news, and Ha Dang, a journalism sophomore, is a contributor to media outlets. This feature was produced with the Reporting ASEAN series on media issues, edited by Johanna Son.

Vietnam witnesses on average 10 cases of violence, threats and obstructions against journalists each year, even though the country is no longer at war and there are no ethnic or regional conflicts at present, according to my own observation.

How to use data for better storytelling and how to produce infographics topped the online skills that journalists, trainers and news professionals from Cambodia, Laos, Myanmar and Vietnam (CLMV) say are most needed in order to stay with COVID-19 as a long-running story.