Phnom Penh–Cambodian journalist Khim Sambo penned an article in late June 2008 for the now-defunct opposition-affiliated newspaper “Khmer Conscience” describing how a senior police chief found himself in a gambling incident in a casino at eastern border town of Bavet.

“When he loses US$100,000, the casino returns US$50,000,” Khim Sambo reportedly wrote about the chief cop. “But he plays until losing the returned money, and demands to borrow more. If any casino owner dares to say ’no’, he threatens to arrest him.”

Two weeks later, Khim Sambo, then 47, and his 21-year-old son Khat Sarinpheata were gunned down just outside Phnom Penh’s National Olympic Stadium where they just had their evening exercises.

The crime scene where Khim Sambo and his son were murdered proved to be very ironic. It was just outside the city’s courthouse and considered to be one of the busiest traffic spots in the Cambodian capital – even by 2008 standards.

Twelve years later, the gunmen or their potential mastermind on July 11, 2008, have never been found, named, or – not to mention – brought to face justice.

Khim Sambo’s death made him one of the 14 functioning journalists who lost their lives to the extrajudicial killings in Cambodia since 1994. Up to twelves of them, including Khim Sambo, have never been served justice.

Unsolved cases of murders and death involving Cambodian journalists serve as a disturbing reminder of a chilling message the perpetrators of those murders were trying to send. The working journalists remain reminded of fatal consequence as the ultimate revenge against their career.

One would say trying to solve years-old murder cases against journalists will be challenging.

But for the case of Cambodia, delayed justice is not strange process.

It took the country decades to come up with a special court to prosecute the top responsible leaders of the Khmer Rouge for their roles in the death of at least 1.7 million people under their watch.

As the country’s journalists have been trying to prove every day, the truth will come out one day as long as we work for it. Fourteen slain journalists are not merely numbers. They are husbands, sons, and fathers in fourteen families whose innocent living members have been put to deal with the consequences.

Justice is not exclusively delivered in the courtrooms. It is a process that those whose consciences tell them to really call for finding the truths, while remembering the deceased.

But the relevant authorities – law enforcement officers and magistracies – have their jobs to do: bringing the criminals to face the justice. By doing so, this will prove the government’s spoken commitments to protect freedom of the press as enshrined by the constitution.

While we call for justice be served for the martyrs, conditions of the living journalists are also worryingly turning hostile after the widespread crackdowns on the independent media in 2017.

Just ten days ago, there was a disturbing case of aggressive intimidations against properly-working reporters who were covering a protest outside the Embassy of the People’s Republic of China in Phnom Penh. The reporters were reportedly chased by security forces who were attempting to unlawfully confiscate their phones and recording devices.

In the past month, violence against journalists working at the provinces has been on the rise either, ranging from cleaver and knife attacks causing injuries to four reporters on their ways back from works in Tbong Khmum Province on September 28 to an assault on a reporter car investigating illegal timber dealing in Stung Treng Province on October 20. 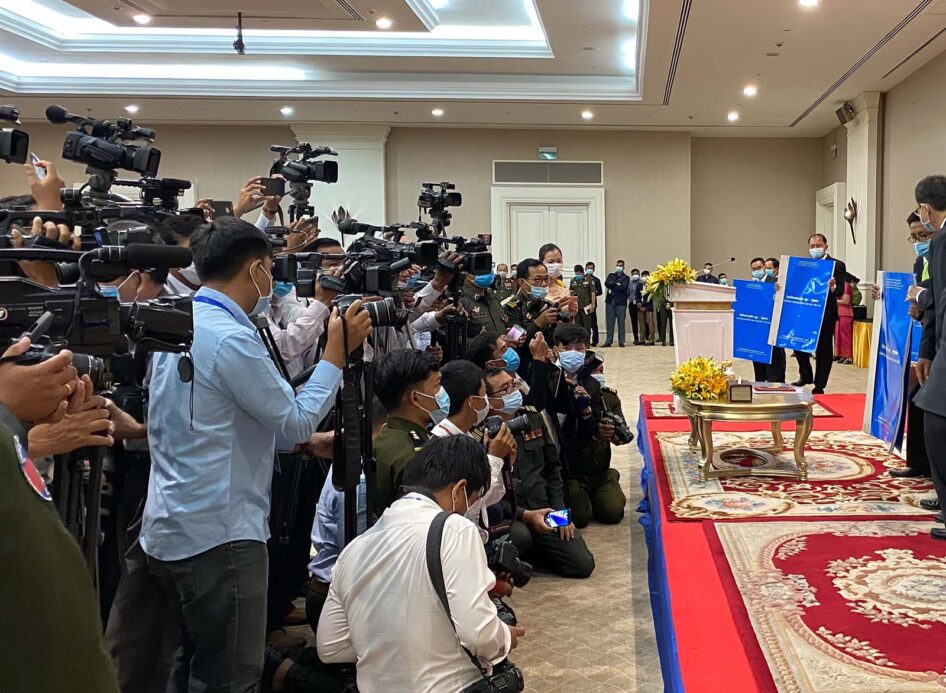 An army of journalists during an event at the prime minister’s office in Phnom Penh on August 27, 2020. (By: Aun Chhengpor)

Today is, of course, the International Day to End Impunity for Crimes Against Journalists. While the day provides a conceptual ground to call for justice for the martyrs, and greater respect and protection of the living journalists, such resolves must come every single day.

Aside from the need of protections for physical safety, legal shields play an important role in providing a friendly environment for the journalists in Cambodia.

The Cambodian Journalists Alliance (CamboJA) has recorded some 59 cases of both physical violence and judicial actions against journalists in the last ten months of 2020, including some 27 arrests.

During the court processes, some outspoken journalists like former Radio Free Asia (RFA) reporters Yeang Sothearin and Uon Chhin, and Russia Today’s news fixer Ratt Roth Mony have seen their cases being pushed back and forth in an unending procedure. For the RFA reporters’ case, they have been at the court for about 36 months since they were arrested in November 2017, that has put them in “uncertainties in living a normal life”.

While Cambodian journalism sector is still in its long journey to improve and uplift the human resources working in the industry, an enabling environment is needed so that the journalists can do their proper jobs independently with greater responsibly. No journalist – and a human being – deserves extrajudicial killing, intimidations against their wills, or any forms of physical violence.

National agencies, running from executive bodies to security units and judicial officials, are obliged to work harder to bring justice and protection of journalists from all media houses so that they, too, can serve the public well.

*Aun Chhengpor is a Cambodian journalist based in Phnom Penh. He covers politics, development, Mekong region, and ASEAN. He graduated with a degree in media management from the Royal University of Phnom Penh. Since 2017, he has been a trainer in journalism and media literacy.