Cambodia: Towards Further Awareness Raising on Gender-Based Violence and Harassment

Hem/Nyheter/Cambodia: Towards Further Awareness Raising on Gender-Based Violence and Harassment

Every year, from 25 November (International Day for the Elimination of Violence against Women) to 10 December (International Human Rights Day), the 16 Days of Activism Campaign is carried out all over the world. The campaign calls for awareness and accountable actions against one of the world’s most persistent violations of human rights – “violence against women”. Many women are facing the physical, psychological, socio-economic, and the worst challenge of discriminatory attitudes and behavior is verbal abuse/ violence and harassment. At the same time, LGBTQI communities are facing the same treatment.

As a part of Fojo Media Institute’s community outreach mission for contribution towards the 16 Days of Activism, it plans to challenge Gender-based Violence (GBV) against women, by the collective’s messages that raise awareness on GBV affects. Also, highlighting common discriminatory attitudes, and calling for clarity and improvement of laws, and efficient protection-mechanism.

To end all forms of discrimination and violence, we need to amplify women’s voices (along with voices of other genders) to express a negative impact of gender-based violence to their life. We aim for a society that is free from all forms of violence by promoting social justice, and gender equality by providing the inclusion of all genders’ voices. In this whole campaign, 42 concerned-individuals of 24 women, 14 men, and 4 other gender-identities from Cambodia (19), Myanmar (21) and Vietnam (2) share their messages. Among them, 21 are journalists and media trainers.

19 Cambodian send their messages to Fojo for the GBV campaign’s theme “From Awareness to Accountability”. 9 women, 6 men, and 4 other gender identities are from various professional backgrounds with journalists, gender organization, LGBTIQ community, young women and youth leadership, labor rights and union representative, and media trainer to share their meaningful insights via SEAMTN Facebook on social media to the public.

Most people in the campaign raise online harassment (“Online Violence”) against women while people trendily use digital platforms for social connection and communication in both personal and work. In this situation, it is a critical time to raise public awareness on online harassment and abuses by creating friendly mechanisms in combating GBVH against women, girls, LGBTIQ people, especially for the vulnerable groups, and strengthening gender security protection.

In August 2020, Cambodian government proposed and drafted a “Law on Public Order” to maintain public behavior, cleanliness, noise, and social values, all under the theme of maintaining “public order”. Regarding draft law in violation to freedom of expression and assault human rights, in particular prohibiting women from wearing overly revealing clothing. Immediately, a joint statement endorsed by 65 national and international “CSOs call on the Cambodian government to urgently discard the PODL by suggesting government set a prioritize mechanism in the prevalent gender discrimination, gender-based violence and discrimination across education, economic, social and political participation through legislative reforms and policy change”.

Ms. Bunn Rachana, Executive Director of Klahaan Organization said in the campaign of 16 Days Activism, “I believe in the power of using our voice collectively to make positive change. I want to see the government works more proactively on ending street harassment and Gender-based Violence against women and girls as well as LGBTQI, rather than focusing on what women choose to wear, or do with their bodies.” 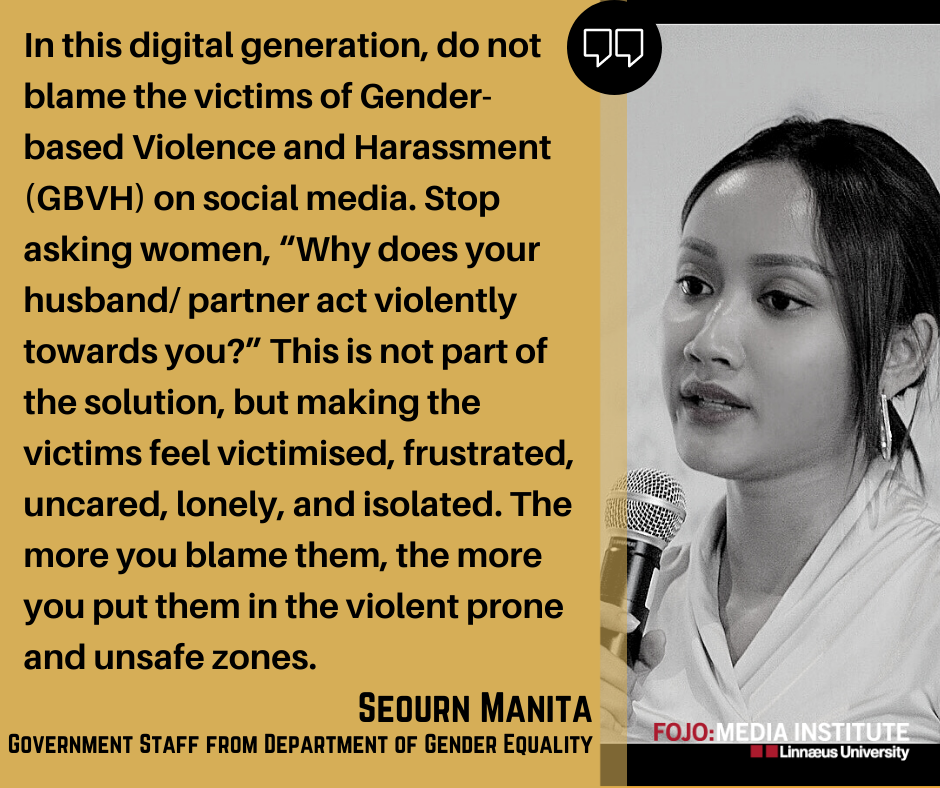 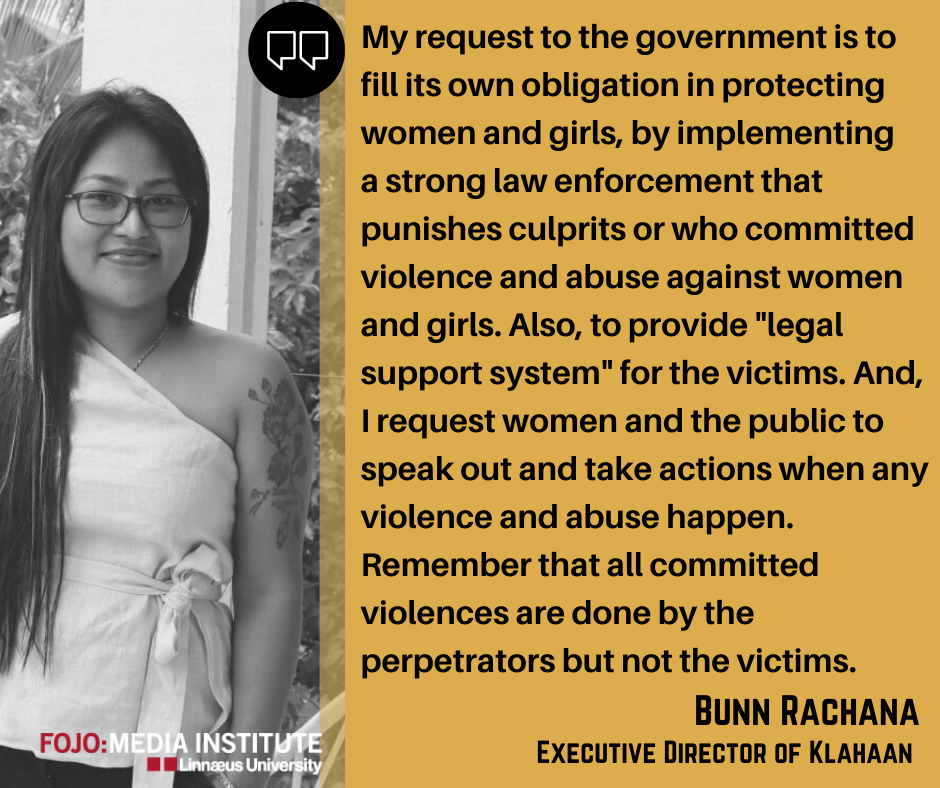 Roles of Media and Journalists

In Cambodia, Gender-based Violence is still at a high-level notification and not paying much attention from the relevant authorities, institutions, and media outlets. Thus, gender advocates suggested journalists should increase more focus on covering gender issues and human rights violations to raise awareness of the public as part of gender mainstreaming.

People who shared their view GBVH in the campaign, asking journalists, media outlets, social media and digital users to increase their “in-depth” knowledge on gender issues while building capacity to strengthen their skills in a professional covering/reporting news related to GBVH. In additions, journalist and media outlets should be receiving training relevant to topics such as women’s rights, feminist theory, CEDAW*, national regulations and gender policies, C190 ILO’s Violence and Harassment Convention, and so on from gender experts or gender organizations.

As an extra message, journalists must follow the code of ethics and professional journalism when reporting GBVH issues with gender sensitiveness. The code of ethics for journalism in the media sector is essentially implemented as the basic principle of fairness, accuracy, truthfulness, and objectivity. It will improve the confidence of readers and in serving a comprehensive sense for the public, especially in news reporting with seriousness and honesty. In contrast, the media need to be highly conscious about possible damages done unto victims.

In the 16 Days Campaign, Ms. Kann Vicheika, a Media and Journalism Trainer said “Journalists must report on all related forms of violence against women and vulnerable people in an ethical and professional manner in order to ensure victims receive justice (they look for), and not be subjected to further blames due to the news reporters’ (unethical works).”

Recommendation to Government and Society for Combating GBVH

The government should broadly raise awareness on respecting all genders and necessary protection while many people are not paying much attention to GBV and its negative impacts on individuals. The government should take actions towards GBV crimes, just like the prevention of COVID-19 pandemic. So that people are able to discuss more on the issue, and become more aware. And, the government must have a monitoring system and committee for the GBV cases.

The messages also call for law enforcement of existing laws and taking legal actions against perpetrators on GBVH crimes, instead of blaming the victims.

Government must set clear policy and laws in promoting women’s rights, and protecting women and girls to have the “violence free environment”.

Gender organization should work closely with journalists and media outlets in relation to gender mainstreaming, such as discussions and training on reporting through ‘Gender-lens’, and issues of GBV in order to follow an accuracy and fairness of disseminating sensitive information to the public. Also, the society has its role to end all forms of discrimination against women, girls, LGBTIQ people and other vulnerable groups.

Hopefully, people in the society change their gender insensitive behaviors to sensitive aspect to create positive impacts on the society’s development in which all genders’ participation counts with appreciation and respect.